Poster for Houdini's Water Torture Cell play to be auctioned

Potter & Potter's upcoming auction of "The Magic Collection of Ray Goulet" will include a likely one-of-a-kind Houdini rarity. It's a broadside for his 1911 playlet, "Challenged" or "Houdini Upside Down". This was the short play Houdini performed only one time for the purpose of licensing his yet-to-be-revealed Water Torture Cell. The poster, which I've never seen before, reveals some fresh details about the play, including that Houdini's assistants and brother Leopold were part of the cast. And it's signed! Below is an image and the full auction description. 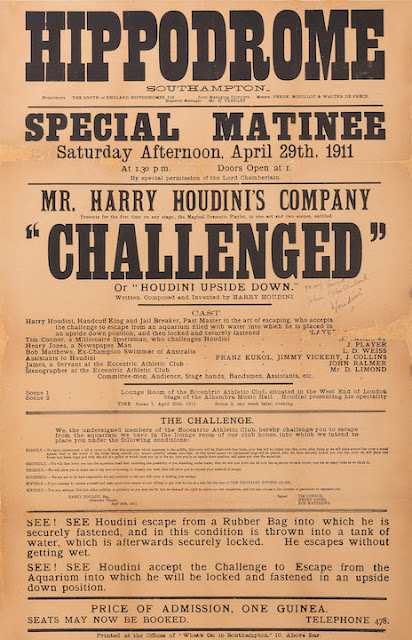 Houdini, Harry (Ehrich Weisz). Hippodrome Southampton. Houdini “Challenged”. Southampton: What’s On in Southampton, [1911]. Letterpress poster advertises a matinee performance of “Challenged” or “Houdini Upside Down” at the Southampton Hippodrome. Inscribed and signed by Houdini in the central right blank space: “To my friend John Mulholland/Houdini.” 30 x 20”. Browning, restored losses at folds affecting parts of the text, a few chips and creases. Laid down to Japan. The only known example of this broadside.

Houdini devised and wrote the script for “Challenged” with the goal of protection in mind – that is protecting his Water Torture Cell from infringement by copycat escape artists. Under British law, theatrical productions appropriately staged, scripted, registered, and performed before a live audience could be protected from infringement by imitators. Consequently, after assembling his cast (enumerated in details on this poster and including his three trusted assistants, James Vickery, Jim Collins, and Franz Kukol), the props, and booking the theatre in which to perform, Houdini staged the “playlet,” just once, on April 29th, 1911 in Southampton.

According to Houdini scholar Patrick Culliton, the show may have been staged for an audience of just one, as the one guinea price of admission was an outrageous sum at the time. Interestingly, the Water Torture Cell is here described as an “aquarium,” and part of the poster suggests that Houdini will also be locked in a rubber bag which will then be tossed in the tank, from which he will escape. In his regular vaudeville and music hall turns, the bag was not part of the act.

The broadside is inscribed and signed by Houdini to the scholarly magician and editor of The Sphinx magazine, John Mulholland, a fellow New Yorker, dedicated magic collector, and a sometime visitor to Houdini’s home as a young man, where he undoubtedly learned to appreciate the value of rare and precious magical artifacts.

The auction estimate is $15,000 - $25,000. But for something this unique and important to Houdini history, the sky could be the limit.