Yar, The Primeval Man by Harry Houdini (Part I)

In 1921 Houdini wrote a treatment for a proposed movie called Yar, The Primeval Man. It was never made, which might have been for the best. Of all Houdini's writings, Yar may be the most revealing of his relationships and his inner world (his inner caveman). And like his short story "Bahl Yahn, the Strong Man", of which it bears many similarities, Yar was clearly written by Houdini himself.

Houdini copyrighted Yar by printing it as a 12-page pamphlet that he appears to have only given out to friends. I own the copy he gave to Joseph Dunninger and I've used it to transcribe the story in full below. Because of the length, I'm sharing this in two parts. I've also spiced it up with photos from The Man From Beyond. 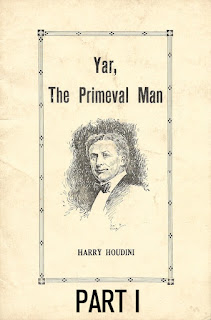 The Strange People are happy. They dance with glee for they have the better position. They squirm in and out the great boulders, and with mighty pushes send huge rocks tumbling down on their enemies, the Little People.

They soon tire, however, of watching the writhing wretches below, and turn to rest in their caves. Yar, chief of the Strange People, looks for War, his mother (she cannot keep up with the younger people, so Yar always swings her over his back and carries her to her cave) but she is nowhere to be found.

Yar is perplexed. Where is she? Is it possible she has fallen in the tsish tsish (great waters)? He runs back and anxiously surveys the cliffs. There he sees her hanging helplessly on the ragged edge. His primitive mind, unable to reason his own danger, he run swiftly down the incline, reaches her, and with a guttural cry swings her over his back just as Gurre, the chief of the Little People and deadly enemy of the Strange People, pounces on him and drags him down to his cave.

Yar holds one hand on his mother to prevent her from tumbling off his back and with the other hand fights gallantly with his assailant. He is overpowered, however, when Huf, son of Gurre, comes to his father's aid and Yar is obliged to watch his mother being dragged away by her hair. The Little People tie Yar with the fibrous ferns and foliage to two long branches of the huge trees, arrow fashion, in the same manner that they dispose of the sick and wounded people, so that he can be catapulted into the great waters.

After their labor of securing him, the Little People all gaze on Yar with savage joy; all but Aie, the sun woman, whose hair is like the sun. She is the daughter of Ahi the Loon, (Ahi never leaves his cave, not since he lost Ooo, the mother of Aie).

Many moons before, all the Little People were hunting in the black forest for the small animals for food, Ahi wandered further than any other people ever had dared. He soon returned, however, but with him was a strange woman, a woman with Sun Hair. She was a strange creature, evidently of higher intellect than the Little People, but they accepted Ooo without showing any emotion except the first one of surprise. Ooo liked to wander on the higher cliffs, but Ahi soon showed her, in his primitive way, that he did not care for her wanderings. Ooo was an obedient and affectionate mate. Soon Aie was born. It was then that Gurre, the young chief, coveted Ooo.

There were some stirring battles between Ahi and Gurre, at which Ooo looked on quietly with her cryptic smile. One day Ooo, who was running swiftly away from Gurre, missed her footing, and fell headlong into the Great Waters, just as Ahi emerged from his cave. He thought Gurre had thrown or pushed Ooo. Again they had a battle. Ahi was badly wounded and ever since he has been a loon.

Aie, his daughter, brings him food. Seeing Yar, Aie gazes fascinated at this strange being, who is different from her people. She is pleased with him. She touches him, she looks into his eyes. Yar seems as pleased as she. He is really too surprised to release himself, until he sees her shudder. It is the shudder of fear for she hears Thor, the God of Thunder, rumbling with displeasure.

Yar quickly breaks the bonds while the people run to their caves to get away from the angry waters of Thor. 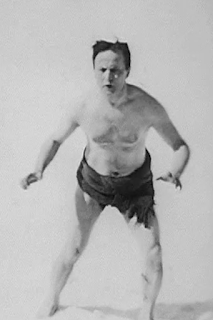 Yar finds his mother in places her in a hole to protect her from the Angry Waters. He, however, does not fear Thor. He rather likes the torrents of water, and the angry lights of Thor’s eyes (lightning).

He walks toward the black forest, catches some of the scurrying animals and returns to feed his mother. Thor bellows louder and louder and the people huddled together, whimpering with fear. Thor sends another angry flash of his eyes right into the Black Forest and presently the Black Forest burst into flames.

The angry flames come nearer and nearer to the caves and the people, excited and shaking with fear, run in all directions. Yar, with his mother on his back, climbs to the high hills. Aie follows him with her eyes. Surely the strange being can conquer Thor, she feels. She runs after him and her father, who is now forced to leave his hermit cave as the flashes approach, follows. Then the people who cannot reason, forgetful that Yar is their enemy, also follow.

At the top is safety. Yar stands at the brink, defying Thor to send his flames up on the hill. Aie is close by looking at him in admiration. Her fear leaves at Yar’s bravery, but there in the background is Huf.

Huf sees the look on Aie’s face. With a quick stride he reaches her side, for he has chosen her to be his mate. He seizes her by the hair. She struggles and squeals. Yar turns to see that it is the Sun Girl.

He seizes Huf by the nape of the neck and flings him aside. Aie glides shyly to Yar’s side. They chatter in their nameless language, well pleased with each other. As they look each other over, not yet able to understand the call of love, the storm subsides. The people are hungry. Yar is the first to go for food. He enters the black forest. The people follow at a distance, ready to run at the first sign of Danger. But there is no food. The animals have vanished. Yar burrows in the ruins. He soon discovers a creature. Strange, it does not struggle. He had always been obliged to fight the creatures. In a rage, he tears it to pieces. Hunger calls and he tastes. It is not disagreeable, though of course, there is no rich dripping blood. But in all the vast forest there is no fast scurrying creature, so this must suffice until his hunger is appeased.

Aie soon follows the example of Yar and burrows into the ground.She also imitates Yar by eating the roasted animals. The people, desperately hungry, follow suit and soon all are feasting. After the feast, they look around for caves, and find them on the side of a cliff.

Yar finds an attractive large one. He enters, but quickly emerges, grasping by the throat an animal which had escaped the flames. He quickly kills it, and dexterously skins it. He now has food for a long time.

He enters the cave again, but this time more cautiously, and finds no more fighting creatures. He then looks for and finds his mother and gently shoves her into the cave. The people are soon asleep. From the outer edges of the black forest come the Great Animals, who now can find no food, since the fire has destroyed their prey. 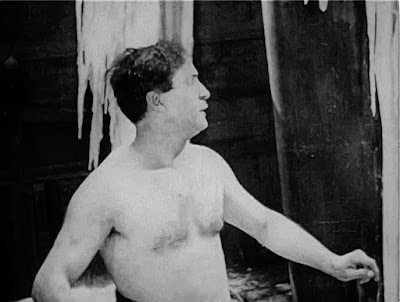 Yar hears their roars and sends a challenging cry. Aie comes shivering from her cave. The night is cold. He shoves her in the same cave with his mother, but it is cold there too. He has an inspiration. He tosses the skin of the animal he has killed over the two women. (The people wore no covering of any kind, save leaves.) Yar also remembers that he felt no cold when he walked on the ashes of the great forest.

Again his mental faculties work. He rushes over to the forest, grabs a smoldering ember and places it in front of the cave. The flames lick up the twigs and leaves lying about. He gathers more wood and presently has a roaring fire.

Aie hears the crackling of the flames and thinking the animals have approached, runs to the entrance of the cave with the bearskin about her. Yar’s mother whimpers when she finds her covering gone. Yar hears her whimper, realizes that both women want the fur, and is perplexed.

He tries to take it from Aie but she won't give it up. Yar’s mother is shivering. He tries to push the fire near the cave, but finds it hurts. He looks about for another animal. There are only the Great Ones beyond the forest whose growls he hears.

A solution to his problem offers itself, and acting upon it, Yar takes the fur from Air (who kicks and bites to keep it) and with his teeth tears it in twos he does his food) and gives each woman half of it. They are then all pleased, but Aie soon finds she must keep both hands on the fur to keep it on; she cannot wrap it about her as before.

She makes a spring to take the other part of the skin from the older woman, but even then it won't stay put. Whenever Aie is perplexed she flies into a rage. To Yar she looks adorable in her rage, but he must find a way to appease her.

Yar remembers how he was bound on the catapult, so he hunts for the long ferns, wraps Aie in the fur, and winds the ferns about her body. The touch of her flesh thrills him. He touches her again, each time more tenderly, and puts both arms around her. Slowly he crushes her to him. Some impulse drives him to place his lips on her, and then he kisses her. It is the first kiss.

Aie dances with joy. Yar is astonished at her pleasure and kisses her again and again. The people who had slowly gathered around the blaze look on in awe. Huf, who has looked on all this with displeasure, glides up to Aie. He would like to try this new amusement.

He touches Aie, roughly seizes her to reach her lips. Aie quickly stoops, picks up a stone and promptly crashes it upon Huf’s head.

Yar’s mother, hearing all the exciting chatter, emerges from her cave holding the fur about her. Yar remembers what he did to Aie’s robe and arranges his mother’s the same way. Remembering in the kiss, Yar kisses his mother. Both are astonished. It is not like the kiss of Aie, but it is as if God kissed them both. It is sacred. A look of joy overspreads the old woman's face and she places her arms about her son, swaying backward and forward with cries of joy.

She places her lips on Yar’s brow. It is a sacred rite. The other females look to their children (as a rule they dragged them by their hair), but now they lift them in their arms in imitate Yar’s mother. The children are rocked to sleep for the first time, to the worldless crooning of the mothers.