The Cancer of Superstition is FOUND!

Potter & Potter Auctions have just made the catalog for their April 9th auction of "Houdiniana" available online and it's a stunner! Early correspondence between Houdini and Martin Beck, unseen film footage, a lobby display board, the infamous "frenemies" photo of Houdini and Margery, and...The Cancer of Superstition. 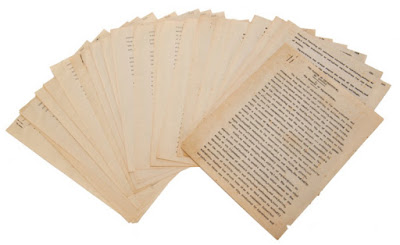 It's hard to say what is the most significant item in this auction, but it could very well be this 31 page unpublished work in progress manuscript for The Cancer of Superstition, a book Houdini was writing at the time of his death with the great H.P. Lovecraft. It has long been considered lost and a bit of a mystery. Not anymore! As the auction description notes:

Houdini, Harry and H.P. Lovecraft (ghostwriter). The Cancer of Superstition. Circa 1926. Collection of 31 leaves, paginated 1 – 10 [11 – 13 lacking] 14 – 34, being an unpublished manuscript of a work in progress on superstition, divided into the three sections, “The Genesis of Superstition,” “The Expansion of Superstition,” and “The Fallacy of Superstition.” Scattering of typed corrections over misspellings or word changes. Differing inks observed between first ten leaves and remainder of file. Pagination inclusive of bibliography (two leaves). Minor foxing, a few short tears and nicked edges, fine overall.

Previously known only in outline and through part of a first chapter, the work was suspended soon after Houdini’s death as the magician’s widow Beatrice did not wish to pursue it further (see Joshi and Schultz, An H.P. Lovecraft Encyclopedia (2004) [116 – 17]). The material here shows the project further along than other surviving sources have indicated it had reached, Lovecraft and Houdini putting forth a general theory of the history of superstition as an “inborn inclination” traceable to “primitive races” “utterly ignorant of the laws of Nature” that now “persists only through mental indolence of those who reject modern science.” Situating superstition at great length among an array of pre-modern belief systems including animism, fetishism, witchcraft, and black magic, the fascinating document shows the authors struggling to balance this primitivist theory of the development of superstition against evidence of what was really a cross-cultural “scourge” surviving among their contemporaries, even the well educated, introducing citations of early twentieth century studies on superstitious beliefs among students and faculty at prestigious American universities. The few missing pages from the first section distract but a little from the overall strain of thinking revealed in the second and third parts, and a bibliography at the rear provides the full spectrum of ideas Lovecraft and Houdini were negotiating before the project was unexpectedly cut short.


Potter & Potter have put a $25,000 to $40,000 estimate on the manuscript. This will definitely be one to watch. But so will so many of the lots in this amazing auction of Houdiniana.

CLICK HERE to download a PDF of the catalog from the Potter & Potter website. You can also buy a printed edition for $35. The auction takes place at 10:00 AM on Saturday, April 9th in Potter & Potter's Chicago Gallery.

Lots are viewable and open to bid online at Liveauctioneers.com.

UPDATE: Not mentioned in the auction description above is the uncredited work of author C.M. Eddy Jr. on this project. For more on Eddy and the statues of this project at the time of Houdini's death, check out Joe Notaro's Harry Houdini Circumstantial Evidence to read an amazing letter written by Lovecraft after Houdini was hospitalized in Detroit:

"Poor Eddy, who with my aid has been doing some revision for the nimble wizard, is quite worried about his unexpected intervention of the gods."


UPDATE 2: For more on Eddy and his work on this project, read: C.M. Eddy, Jr. and The Cancer of Superstition manuscript.