Here's another incredible item from Potter & Potter's auction of Houdiniana set for this Saturday, August 23. This is the unfinished manuscript for a book called Witchcraft that Houdini was apparently working on at the time of his death. While I knew about The Cancer of Superstition, Houdini's collaboration with H.P. Lovecraft, this is the first I've ever heard of Witchcraft. Here's the auction description. 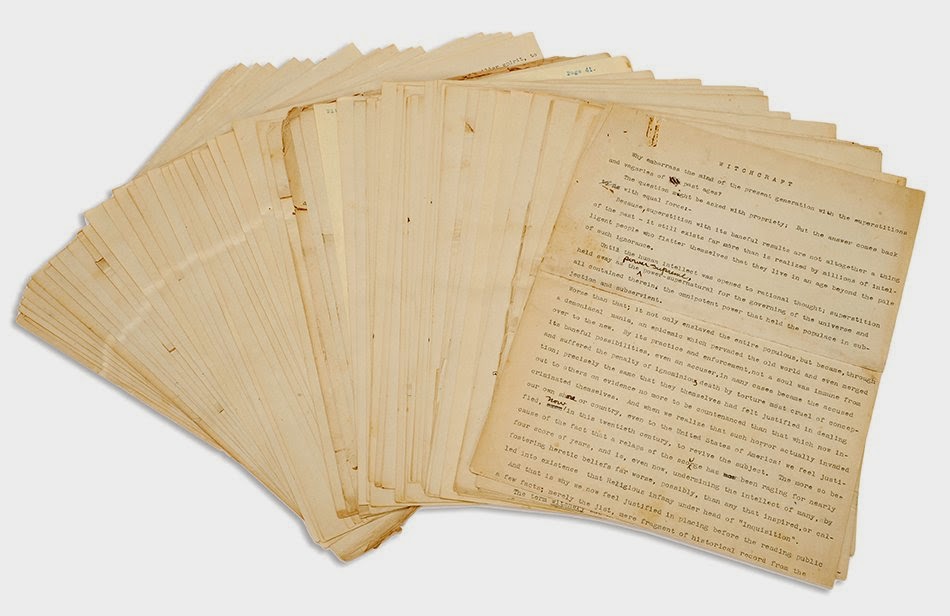 Detailed and important typescript with a profusion of holographic corrections and additions in Houdini’s hand throughout. The subject covered is, broadly stated, witchcraft. Houdini examines the entire subject, and gives a thumbnail sketch of its history, drawing and quoting heavily from published sources. More specifically, near the end of the manuscript Houdini writes in detail about the Witch of Endor, a medium in ancient times who was reportedly able to summon the spirit of Samuel at the command of King Saul of the Kingdom of Israel. In much the same way Houdini crusaded against spiritualists in his 1924 book A Magician Among the Spirits (several subjects from which appear in passing in these pages), so does this manuscript demonstrate his unwavering crusade against pillars of the spiritualist faith, which so often used Bible stories as support for its cause. A total of 62 numbered pages on 4to sheets, typed on rectos only, some significantly larger after cutting-and-pasting. The professional tone suggests a guiding editorial hand, while the hundreds of corrections in Houdini’s hand show his tendency toward misspellings and awkward phrases. Some corrections are in pencil or red pencil.

A copy of an unsigned letter regarding Houdini’s work on the manuscript, dated July 16, 1926, is included, and shows that this was one of the last publishing projects he was working on before his death. Accompanied by a letter of provenance tracing the ownership of the manuscript.


Wouldn't it be wonderful if the winner of this manuscript saw fit to have it published?