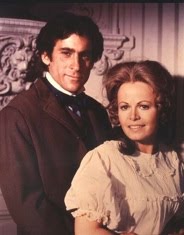 For my money, the best Houdini biopic is the 1976 made for TV movie, The Great Houdinis. Not only does it have an amazing cast, but what at the time seemed to be steamy confection of fictionalization has over the years turned out to be fact -- such as Houdini’s affair with Daisy White and Bessie’s alcoholism.

The Great Houdinis stars Paul Michael Glaser as Houdini. At the time Glaser was a major TV star from Starsky & Hutch and a ‘70s sex symbol. Glaser gives us the most likable Houdini since Tony Curtis. Sally Struthers, also a major TV star from All in the Family, turns in a stellar performance as Bess (more on that later). 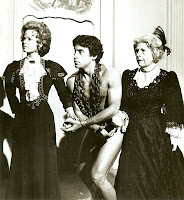 The Great Houdinis was conceived by writer-producer-director Melville Shavelson for ABC Circle Films. Harry Blackstone Jr. is credited as Technical Advisor, but magic notables such as Manny Weltman, John Gaughan, Don Bice, and Abb Dickerson also contributed. It was filmed at the 20th Century Fox studio with the theater scenes shot at the historic Wilshire-Ebell Theater. It first aired on Oct 8, 1976, from 9pm-11pm, as part of ABC’s Friday Night Movie. It was repeated on April 6, 1977.

While The Great Houdinis took great liberties with the truth -- such has having Bessie miscarriage when Houdini fails to escape plugged handcuffs during a bridge jump -- but it also recreates real-life moments not found in any other Houdini biopic. We see Houdini escape Darby handcuffs in London by giving them a hard rap. Houdini buys Mama a dress worn by Queen Victoria and presents her like a Queen to relatives in Budapest. We get to see the famous Atlantic City seance with Sir Arthur and Lady Conan Doyle, as well as Houdini testifying before the U.S. Congress. We also get a memorable encounter with Margery the Medium (Barbara Rhoades), and get a good recreation of the notorious 1927 Arthur Ford committee seance. The film also makes wonderful use of the song Rosabelle and the significance it held for the Houdinis. 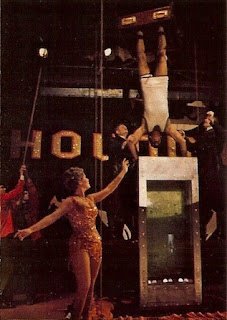 The film was also the first to dramatize the infamous dressing room punch. In this version, Houdini is having an argument with Bess and that is what causes the fatal moment of distraction. But the drama of Houdini dying onstage was just too great for the filmmakers to resist, and they go on to show Houdini failing to escape from the Water Torture Cell, perpetuating the myth first started in the 1953 Tony Curtis movie (although voice over does tell us Houdini died in Grace hospital).

But it’s the characterization of Bess where The Great Houdinis digs deep to reveal the truth. A better picture of Bess was starting to emerge in 1976, thanks to Doug Henning’s relationship with Marie Hinson, but it had not yet been chronicled. But here in The Great Houdinis we get a strong-willed, showbiz savvy Bess, dealing with always being the second most important woman in her husband's life, who develops a taste for alcohol and throws out more than a few curse words along the way. While it’s up for debate how much open tension (if any) existed between Bess and Mama, I think anyone who knew Bessie Houdini would recognize her more in Sally Struthers than in the sunny disposition of Janet Leigh or later Stacy Edwards. 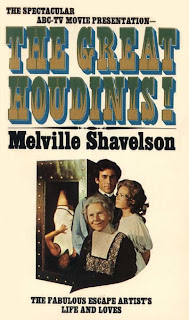 The Great Houdinis was also published as a novelization written by Shavelson. The well-written book contains one scene not in the finished film -- an early flashback of Harry and Bess in a graveyard lifting information from headstones for their spiritualist act. Houdini’s amorous feelings for his frightened bride get the better of him and they make love between the tombstones. “It’s okay, my father’s a Rabbi,” says Harry. This scene is also in the script, but it’s unclear whether it was shot. The novelization was published as a paperback in the U.S. and UK. There is also a rare UK hardcover edition illustrated with photos of the real Harry and Bess Houdini.

The Great Houdinis was released on home video in the UK and in some international territories, but as far as I know it has never appeared in the U.S., which is a great shame. There is a brisk trade in bootlegs of varying quality online. Cosmic Hex, a website the specializes in TV rarities, has a very good transfer available for download in various formats for $3.95.

The Great Houdinis is great indeed. 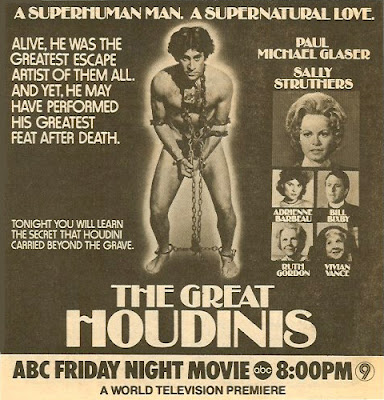 Click for the full behind the scenes story of the Making of The Great Houdinis.
Written by John Cox at 1:06 PM