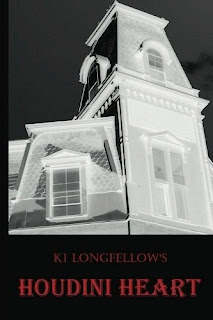 by Ki Longfellow back when it was released on April 25, but it appeared from the description on Amazon that it only name-checks Houdini in its title -- using the master magician as a metaphor rather than an actual character in the book (similar to The Houdini Girl

a few years back).

But now someone has posted on Wikipedia that "Houdini appears as himself" in the fantasy/horror book. As a ghost maybe? Not sure, but it looks like the book now warrants a shout-out, if we are to trust Wikipedia.

Houdini Heart is available as a paperback

and for the Kindle