The untold story of Hardeen Jr. 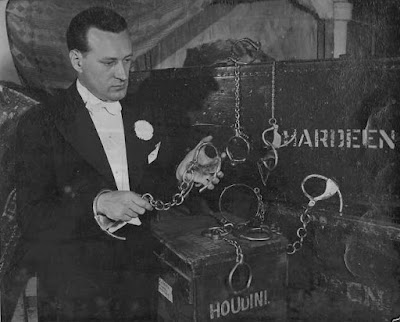 Recently I had the pleasure of speaking with the nephew of Douglas Geoffrey aka "Hardeen Jr." Despite the fact that Geoffrey was the official successor to the Houdini-Hardeen show, precious little is known about him. Most think he only performed for a couple of years, but this is incorrect. Douglas Geoffrey performed as Hardeen Jr. well into the 1950s, and then under his own name until 1988! But let's start his story at the beginning.

Born on May 19, 1907, Douglas Geoffrey Mackintosh fell in love with magic at the age of 8 when he received a Gilbert's Mysto Magic set from his Aunt Lucie. At the age of 12 he saw Thurston perform, and was even invited onstage to assist in a trick. He later took magic lessons from magician Fred Estelle of Brooklyn. One bit of information that the nephew shared with me -- something I've never seen printed anywhere -- is that Geoffrey actually worked briefly with Houdini! At age 19 he got a job in Houdini's full evening roadshow. Unfortunately, his tenure was brief as Houdini died that same year.

Geoffrey performed his own magic act until he met Houdini's brother, Theo. Hardeen, in Atlantic City in 1932. Hardeen had revived his own career after inheriting the Houdini show. Geoffrey became one of Hardeen's assistants, working alongside Jim Collins, James Vickery, and Dolly Spence. He eventually become Hardeen's Chief Assistant, and may have been the man who rescued Hardeen when he had his mishap in the Milk Can.

Geoffrey was initiated into the Society of American Magicians on May 19, 1944. Then on May 29, 1945, during his final show in Ridgeway, Queens, Hardeen named "Doug" his official successor. Hardeen would die a short time later -- it was Geoffrey who broke the wand over his casket in the S.A.M. ceremony -- and Geoffrey went on to perform as "Hardeen Jr", the professional name bestowed on him by Hardeen.

Along with the "Heir to the Throne of Magic" title, Douglas Geoffrey inherited the Houdini-Hardeen show props. Thankfully, Hardeen did not stipulate in his own Will Houdini's instructions to "burn and destroy" all his props following his death. The props Geoffrey decided not to use -- including most of the escape apparatus -- he sold off in the July 1945 issue of The New Conjurer's Magazine on behalf of Elsie Hardeen. Among the items listed was Hardeen's original Milk Can with an asking price of $500. (I believe this is the can currently on display as part of the Houdini Art and Magic exhibition.) One personal memento Geoffrey held onto was the monogramed pocket from the pajamas Houdini was wearing when he died. (Today it's in the collection of Arthur Moses.) He also wore Hardeen's masonic pin during performances.

The Hardeen Jr. show, first billed as Houdini Lives Again! and co-starring magician Bob Sherman aka "Sherms", toured vaudeville and with the USO starting in 1945. Featured in his act was The Flight of Time (advertised as "the last illusion invented by Houdini"); Mummy Case; Houdini Card Star; Nest of Boxes; and the Book of Life (the last effect invented by Hardeen). Even though his newspaper adverts sometimes featured escape imagery, the only "escape" he did was the substitution truck with handcuffs. At one point he was (unintentionally?) billed as "Houdini's nephew."


Hardeen Jr. specialized in "challenge" magic contests, at one time holding his own in a card manipulation contest with Cardini. He also succeeded Hardeen in the Olson and Johnson Broadway show Hellzapoppin, playing a remarkable 80 weeks. Hardeen Jr. took his show international, performing in such far off locations as India and Saudi Arabia. While performing at Union City's Capital Theater, he was assisted by Hardeen's daughter, Gladys Hardeen.

Reviews where good. The Richmond News Leader noted that "the Hardeen act has all the flair of 'big time'. He moves with a clocklike precision, and an evenness that is so often missing in these performances that hit the road."

However, when it came to publicity, Geoffrey was modest, a trait he certainly didn't share with Houdini and Hardeen. This is probably why so little is known of his career today. He even turned down an invitation to appear on the Ed Sullivan Show. Instead he enjoyed performing smaller venues, and in a home theater which he built behind his house in Queens that he called the "109th Street Playhouse." Here he would perform magic during parties, which he threw often.

Geoffrey continued performing until he physically couldn't manage the coin and cards manipulations. He gave up the stage in 1988 and died on January 14, 1990 at age 82. The S.A.M. performed a Wand Breaking ceremony and buried him with his magician's baton. His close friend, William Rauscher, who penned the book The Houdini Code Mystery

, conducted the funeral. Rauscher would carry on performing many of the Houdini-Hardeen magic effects he received from Geoffrey, including The Flight of Time.

Douglas Geoffrey did not formally pass on the Houdini-Hardeen-Hardeen Jr. show to any successor. But he carried the torch admirably for many years, and his life and name should definitely be celebrated as part of the larger legacy of Harry Houdini. 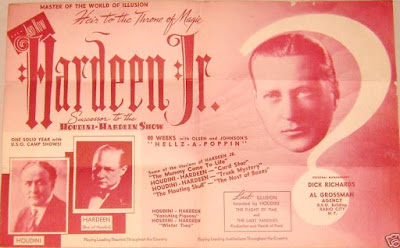 My thanks to the nephew of Hardeen Jr. for the information and the use of his photos.
Written by John Cox at 7:56 AM