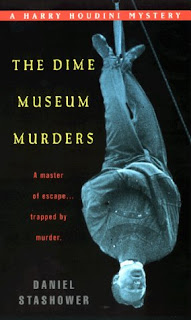 and The Floating Lady Murder

, in February of 2012. Amazon also shows a Kindle release for Dime Museum.

First published in 1999 and 2000, the books feature a struggling Houdini, Bess, and Dash caught up in fictional murder mystery adventures before the turn of the century. Floating Lady Murder also features Harry Kellar.

I've fired off an email to Titan to see if we can get a look at the cover art, and whether they will be reprinting Stashower's third book, The Houdini Specter.

, as part of their "Further Adventures of Sherlock Holmes" series.
Written by John Cox at 4:56 PM