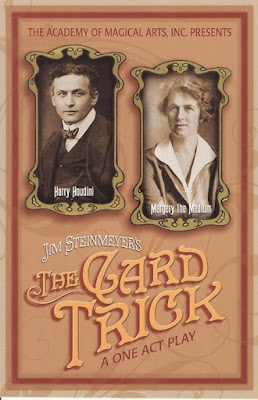 On Thursday, May 26, I had the pleasure of attending the debut of Jim Steinmeyer's one act play, The Card Trick, at The Magic Castle. The play features Jim Bentley as Houdini and Jeanine Anderson as Mina Crandon a.k.a. Margery the Medium.

The play is fiction based on fact -- an imagining of what could have happened between Houdini and Margery during their 25 minute private meeting while Margery was being investigated by the Scientific American. Houdini was on the committee, and it was his work that ultimately led to Margery being denied the prize for genuine mediumship. But before the verdict was handed down, Houdini and Margery had an off-the-record conversation where, it's almost certain, Margery attempted to bribe him. This is pretty much what happens during The Card Trick, but the way in which the two joust using dueling card tricks is very clever and entertaining. (Note to Hollywood: this is how to do Houdini fiction.)

I've seen Jim Bentley perform as Houdini several times, including his excellent stageplay in 1999. When he stepped out on stage in his full Houdini makeup, there was a familiar thrill of recognition, almost as if Houdini himself had made a reappearance. There are no escapes in the play, but Houdini's own card trick is a beautifully engineered stage illusion (based on Pepper's Ghost?) performed in full light on the stage of Peller Theater and a real show stopper. 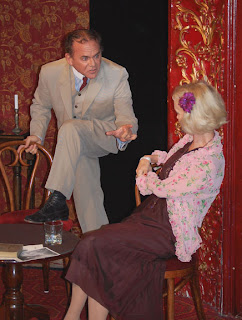 Jeanine Anderson (who currently has a recurring role on Glee) makes a dynamite Margery, who really holds the upper hand throughout the play. While helping herself to her private stock of "Bursky's Gin" (an inside joke), she keeps Houdini flustered with her open flirtations and ability to manipulate him by tweaking his insecurities about his lack of education (and Jewish ethnicity) among the Scientific American committee. At one point Houdini offers to buy her card trick before she concludes it when he fears it might actually stump him. I won't spoil the outcome, but Margery's trick is also a show stopper in a different way.

Due to popular demand, The Card Trick was repeated at 9:30 and then again at 10:15. Each performance benefited the Dai Vernon fund. Luminaries such as Patrick Culliton, Joe Fox, Jonathan Pendragon, and Lisa Cousins were on hand. Jim Steinmeyer spoke briefly after each performance, and all the attendees I spoke with had nothing but good things to say about the play.

The Card Trick was also presented free of charge on Friday and Saturday night (I was able to catch the Saturday show as well) with the talented and funny Derek Hughes performing before and after the play. It will be performed one last time on June 3 for the Skirball Center's special A Day at the Magic Castle event.

I did notice on Saturday that the play was being taped, so perhaps it will be available for AMA members to view in The Magic Castle's William W. Larsen, Sr. Memorial Library? Let's hope so, because Jim Steinmeyer's The Card Trick is too good to disappear. 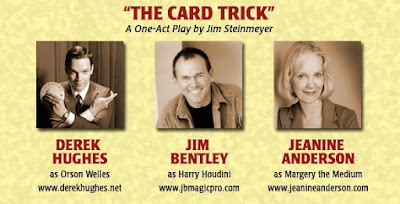 UPDATE: Steinmeyer's The Card Trick published in August issue of Genii.
Written by John Cox at 8:05 AM