The Houdini straitjacket authenticated by magician Murray Sawchuck on last night's episode of Pawn Stars has hit eBay with an asking price of $149,000. 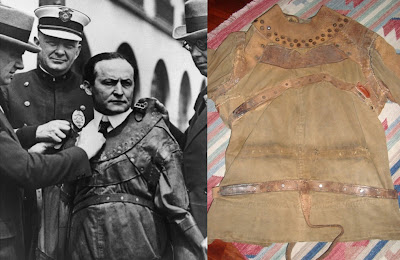 I'll leave it to others to debate whether this really is the jacket we see in the photo above, but the claim that there are only three known jackets isn't quite right. Both Murray and the seller seem to have forgotten about the jacket that belongs to collector Arthur Moses -- currently on view in the Skirlball Center's Houdini Art and Magic exhibition -- which is in this same style. I was also a little bothered by the fact that they kept calling Hardeen (who gave the jacket to the seller's grandfather) "Theo Houdini".

Nevertheless, Murray did a good job identifying the jacket by matching specific stitching and rivets visible in the photo, so this is intriguing. I'll be curious to see what happens.