Recently I was browsing Ask Alexander -- The Conjuring Arts Research Center's amazing search engine, which just passed the two million page milestone -- and I came across this interesting nugget buried in a 1953 edition of The Magic Circular.

So there exists a copy of The Unmasking of Robert-Houdin signed by Houdini to Chung Ling Soo? Nice! I wonder if this is still treasured by the Bothwell-Maye family, or if it has changed hands and now resides in one of the big Houdini or magic collections? Let the search begin.

Chung Ling Soo was actually an American conjurer named William Ellsworth Robinson. Famous in his day, he become more so after dying onstage doing the bullet catch (a trick Houdini now appears to have done in his early career). Another Soo/Houdini mystery is whether Robinson acquired Houdini's Voisin bi-plane following his historic first flight in Australia. We took a look at that question HERE. 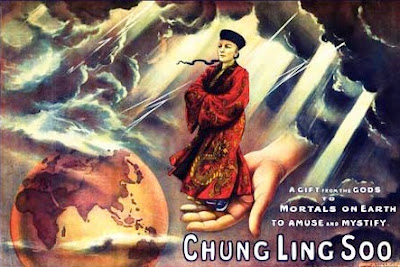