Today I'm happy to present a Guest Blog by Johan Ahlberg from Sweden. Johan has uncovered an unknown story about Hardeen's encounter with a familiar rival "Handcuff King" in Sweden. 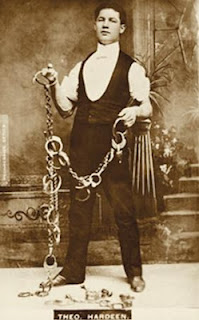 Many years back when I became interested in Houdini, I often wondered if Houdini ever visit my country Sweden? I had found some interesting material about Houdini's tour in Copenhagen in 1913. After spending time in the Swedish royal library, and the post office earned a fortune off me, I found some highly interesting facts -- not about Houdini, but his brother Hardeen!

It was in 1876 on 29th February that Theodore Weiss, Dash, Hardeen was born. It couldn’t have been easy to live in the shadow of his brother Harry Houdini and to be presented as the brother of the Great Houdini! In my opinion Hardeen was a skilled escape artist but maybe he didn’t have the enigma his brother Houdini carried.

In Hardeen's book Life and History of HARDEEN he mentions a performance in Sweden.

Director Jacobsohn, from the Olympic Hippodrome of Stockholm, Sweden, happened to be in England when Hardeen's exploits so widely enthused the public, that he contracted for his performance in Sweden.

On his arrival in Stockholm, Sweden, some one determined to ruin his reputation, and publicly declared him to be an impostor, and challenged Hardeen to escape from some handcuffs which he had made specially for him. All preparations were made for the acceptance of the challenge at the special matinee in the theatre, and, on the appointed day, when Hardeen and the audience had assembled to witness the strife, the challenger failed to appear.

The newspapers of course devoted columns and columns to this episode, and so much court comment was made about this matter that King Oscar of Sweden determined to see this stranger who had raised such furor of enthusiasm, and personally attended Hardeen's performance in company with the Royal Family one evening during the months of April, 1901, at the Royal Olympia Hippodrome, Stockholm.


This is intriguing. What was it Hardeen encountered in Stockholm? Who tried to ruin his reputation and what was these special made manacles?

In the Swedish newspaper of that time, Svenska dagbladet Monday the 1 April 1901, there is an article about Hardeen [these are imperfect translations]: 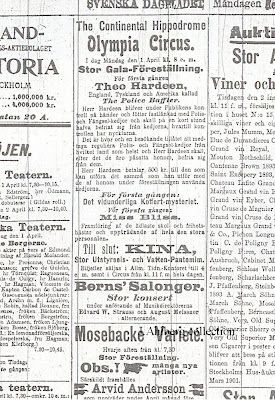 For the first time


In Svenska Dagbladet 18th April there is another article that sheds some light on this mystery.

At the Circus Olympia is a man Theo Hardeen, who calls himself the “police baffler”. His specialty is to crawl into a small tent and there open a pair of handcuffs applied by the audience. He does it very well and many have wondered how does he do it? Especially since he offers a reward of 500 Kr to anybody that can do the same. Later he raised it to double the amount. First our illusionist Nordstrom and latter two English competitors father and son Cirnoc [accepted the challenge?]. Nordstrom didn’t want to tell how he did it, but Cirnoc wrote an article in a morning paper to challenge Hardeen.

Finally there was arranged a special performance at hotel grand where several press agents attended with a few selected locksmiths. In the room there where a small black tent for Hardeen's escape act. The American consul Muir was also present. When the clock hit 15 minutes past five, there was a big fight between Cirnoc and Hardeen when Cirnoc protested that Hardeen would go into the small tent to make the escape. Cirnoc jumped on to a table, pulled up his sleeves, and started to wave his arms and screaming in a strange language. A fight broke out when they tried to get hold of the handcuffs Hardeen brought with him. These handcuffs was examined by Backmans safe factory the evening before, who stated “they where impossible to open without a key.”

Finally they agreed that Cirnoc should open a pair of nice American handcuffs locked on him by Hardeen. Hardeen applied them on Cirnoc's wrists and locked them. Cirnoc went to a corner in the room and opened them in a few seconds! Everything was fair. All waited for Hardeen to do his magic, but nothing happened. They claimed that Hardeen should pay Cirnoc the 1000 Kr, but he refused since Cirnoc never opened his special cuffs. Latter Cirnoc was manacled with different cuffs, chains and padlocks and escaped!


Cirnoc had earlier tried to sabotage Houdini's performances in England, but according to the legend he was beaten by the Bean Giants. Now he tried to ruin Hardeen's performances.

Houdini and Hardeen had some special handcuffs made to look like a standard cuff but with a formidable lock inside. The séance handcuffs looks innocent, like a standard figure eight, but has an impregnable Bramah lock, or so it's claimed. The Houdini Bell handcuff is another unbeatable handcuff with a Chubb style five lever lock. Houdini also had a Ranking handcuff with a special lock no standard key would open.

At this time the Swedish police used a Swedish fabricated Darby style handcuff made by J.Walen in Eskilstuna. Some of these Darbys are lighter than the British handcuffs and takes a different key (photo 1.). The Swedish police also used some Bean pattern handcuffs.


Why didn’t Hardeen take up the challenge? And why didn’t the story add up like Hardeen told it in his book? He could have picked these handcuffs in the regulation manner. Maybe he was tired of Cirnoc and the newspaper men and didn’t want to do the handcuff escape in the open. According to information I found abut Cirnoc, it was not his son he had with him, but his brother. Little is known about Cirnoc but probably his name was Ernest Nurthen born in England 1876 and he died in 1952. He was a professional magician and claimed to be the original inventor of the handcuff act. One mystery remains; who had brought Cirnoc to Stockholm to sabotage Hardeen's performances?