Here's an interesting set of Houdini trading cards from Spain that recently sold on eBay. Released around 1958, these belong to a series that, according to the seller, "speaks of epic men's world records." Notice that the Water Torture Cell card uses a still from the 1953 movie, Houdini. That movie also seems to have inspired the cards depicting Houdini trapped under the ice. 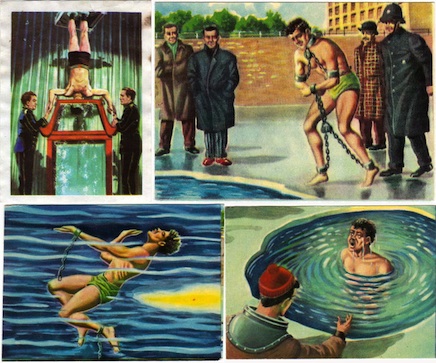 Kevin Connolly of Houdini Himself has made a specialty of collecting Houdini cards for an upcoming catalog. Maybe we'll see these rarities included?
Written by John Cox at 11:51 AM