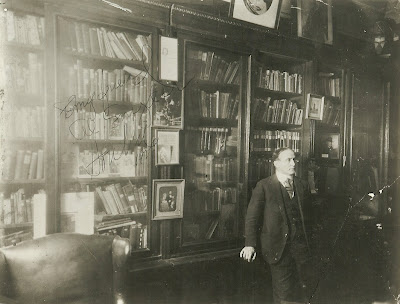 Here's a mid-week treat. David Byron, who blogs at baroquepotion.com, alerts me to LibraryThing.com, a website that catalogs libraries, including Houdini's.

Houdini described his library as "one of the largest libraries in the world on psychic phenomena, Spiritualism, magic, witchcraft, demonology, evil spirits, etc." The largest portion of the library was bequeathed to the Library of Congress, and that forms the basis of this catalog. Additional books have been added from the Messmore Kendall collection, now at the Harry Ransom Center at the University of Texas, Austin, and from various auction and bookseller catalog descriptions.


It's fun to scan through these 80 pages and see what kinds of books Houdini had on his shelf. It's quite a mix of titles, with everything from The Esoteric Basis of Christianity or Theosophy and Christian Doctrine by William Kingsland, to the unfortunate New Minstrel and Black Face Joke Book. One thing is for sure, Houdini's obsession with the mysteries of life after death is made very clear here.

Thank you David!
Written by John Cox at 7:08 AM