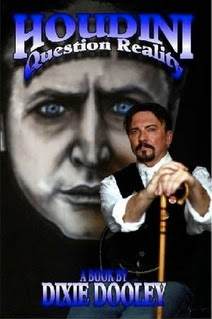 Dixie Dooley's self-published Houdini - Question Reality has been released for the Amazon Kindle.

First published in 2011 as a print-on-demand paperback from Lulu.com (where it is still available), this book is must for Dixie's story about visiting 278 in the 1980s and the hand-drawn picture he includes showing the layout of the entire house. This might be the only record of the original floor plan as it existed in Houdini's day.

The book also contains a lot of other eclectic and intriguing Houdini tales told by a true Houdini aficionado (and a bit of a character).

Get Houdini - Question Reality for the Kindle at Amazon.com.
Written by John Cox at 8:29 AM