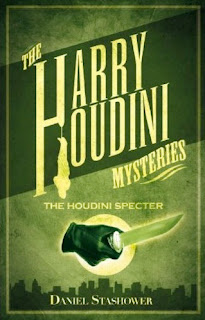 Titan Books reprint of The Houdini Specter by Daniel Stashower is released today. This follows Titan's reprints earlier this year of Stashower's first two books in his "Harry Houdini Mystery" series, The Dime Museum Murders and The Floating Lady Murder.

First published in 2001, The Houdini Specter finds Harry and his brother Dash (Hardeen) investigating a murder with a spiritualist twist in 1898 New York. It was the last book in Daniel Stashower's series and the only one to be published in hardcover as well as paperback.

This new reprint includes an extract from Stashower's The Adventure of the Ectoplasmic Man, which teams Houdini and Sherlock Holmes. Titan reprinted that book in 2009.

Titan has rebranded these as "The Harry Houdini Mysteries" with nifty new series cover art. You can purchase all three books from Amazon by clicking the links below.