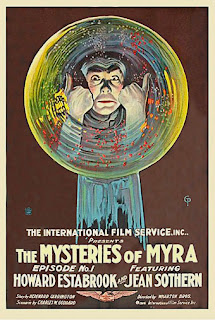 The Mysteries of Myra is a lost 1916 movie serial directed by Theodore Wharton and written by Perils of Pauline screenwriter Charles W. Goddard. Houdini buffs are well familiar with this title as it has always been said that Houdini acted as a technical advisor on the film; one of his first forays into the movie business. But is it true?

While Ken Silverman mentions Houdini's involvement with Myra in Houdini!!! The Career of Ehrich Weiss (aka My Bible), the original source appears to be Milbourne Christopher, who wrote in both Houdini The Untold Story (1969) and Houdini A Pictorial Life (1976) that:

As technical consultant in 1916 to the Pathe thriller The Mysteries of Myra, Houdini devised a whirling-mirror hypnotism machine and special seance effects.


But now Eric Stedman, who recently republished the original The Mysteries of Myra novelization and is working on a modern day adaption, is here to tell us that Houdini was not involved in this production after all. Says Eric.

"Mr. Houdini was not involved in the production of THE MYSTERIES OF MYRA. Nothing could have been more pro-spiritualism and Houdini as you know was interested in debunking all things occult, not promoting them as real as MYRA does. The actual consultants on the film were Hereward Carrington, who was the real-life prototype for the screen's first paranormal investigator Payson Alden, and Aliester Crowley, who the villain the "Master" is made to resemble.

The confusion about Houdini being involved in this serial comes from his relationship with the Grossman pictures outfit which made THE MASTER MYSTERY serial and had filmed two serials in Ithaca previously, where MYRA was filmed, one of which was called THE CROOKED DAGGER. "Houdini is making a serial with a studio that worked in Ithaca" has been transformed over the years to "Houdini consulted on THE MYSTERIES OF MYRA serial which was filmed in Ithaca." No evidence exists that Houdini even ever visited Ithaca for any reason and if he would have worked on MYRA the Whartons would have promoted that fact in their advertising. There's no such mention of him in the original literature; the press releases are all about Hereward Carrington, the prolific spiritualist writer and founding member of early spiritualism societies.

Again, the Houdini connection here is entirely erroneous; if HH had seen the script and all its astral bodies and ghosts flying around and automatic writing he would have laughed it off as ridiculous bunk."

"It seems likely that the numerous escapes in the film may have influenced someone to think Houdini might be involved. Hereward Carrington did not have an association with Houdini that I am aware of till about 1922 when they began to be on friendly terms. There is no known association of Houdini with the film and Carrington never mentioned it and surely would have. If anyone ever discovers proof otherwise I would be interested."


My only disagreement with all this is the idea that Houdini wouldn't have worked on Myra out of principle. In 1916 Houdini hadn't yet formed his combative stance on spiritualism. In fact, his own film, The Man From Beyond, features publicity that could be considered pro-spiritualism, and even promotes the casting of Jane Connelly as a psychic occurrence. While Houdini certainly didn't buy into spiritualism, he seems perfectly comfortable in playing up the theatrical nature of mystical whatnot (Imprisoned with the Pharaohs anyone?), and probably would have seen working on Myra as simply helping engineer movie magic.

But other than that, sounds like Eric and Steve know what they are talking about. While I still think it's important that we learn and consider Christopher's source (which very well could be a letter or diary), I'm willing to accept the challenge to this long held idea that Houdini helped conjure The Mysteries of Myra.