Houdini, the Magician's Code, and the Talking Tea Kettle scandal 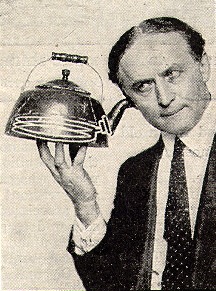 Recently the book Fooling Houdini by Alex Stone has come under fire from prominent magicians such as Ricky Jay in the New York Times and Jamy Ian Swiss in Genii for, among others things, exposing magic secrets and fundamentals.

"I do break that oath," Stone told the National Post, "but for one, I think that magicians take themselves a little too seriously with the secret thing."

The Magician's Code is no joke. Houdini once said that exposing tricks is "taking bread and butter from honest hard working ambitious magicians." But even Houdini once found himself in the hot-seat over this. In fact, the scandal is partially why there is a formal Magician's Code today.

The problem erupted when Houdini published an article in the October 1922 issue of Popular Radio exposing The Talking Tea Kettle. This is an effect in which one can ask a question and hear the answer via a ghostly voice inside a tea kettle. Houdini claimed it was a tool of dishonest spiritualists "for getting money from their credulous followers" and exposed it in the same way he exposed many of their methods "as a public duty."

The trouble was The Talking Tea Kettle was the invention of magician and author David P. Abbott. Abbott created the illusion in 1907 as a "spooky" stage effect, not one for use in the séance room. To many there was a difference between a spiritualist stage act, like The Davenport Brothers (respected even by Houdini), and one-on-one séance room bunko artists like Margery. With his article, Houdini had clearly exposed a stage effect. What made it worse is Houdini purchased his tea kettle from a magic dealer and not from the estate of a deceased medium as the article claimed.

Abbott's local SAM assembly in Omaha took up the matter and, according to The Houdini-Price Correspondence by Gabriel Citron, "voted for Houdini's resignation as President of the SAM over the affair." (!) A letter published in The Sphinx pointed out that Houdini had once forced a member to resign over exposing his Milk Can effect. It's incredible to think that even Harry Houdini could be run out of a magic fraternity for violating the Magician's Code.

However, Houdini argued that he did not expose the method of the kettle in his original article, but that the magazine added the detailed explanation to his text and photographs without his consent. In MUM Houdini reproduced correspondence between himself and the magazine editor, Kendall Banning, that proved this was the case. Nevertheless, even the title of Houdini's article, "Ghosts that Talk by Radio" could be considered an exposure in itself.

Houdini remained president of the SAM and went out of his way to patch things up with Abbott personally, but the controversy only died down when the SAM formed a committee to decide on a formal code of conduct that would govern the exposure of secrets. They determined what was allowed and what was not (devoting a special section to spiritualist trickery) and also laid out punishment for those who broke the rules. A version of those rules stand to this day.

In an ironic postscript, David Abbott would later expose the Talking Tea Kettle himself in his book, David P. Abbott's Book of Mysteries. The book showed that Houdini had actually gotten the method wrong. The method Abbott employed was far more subtle and clever.

I'd tell you what that method was, but... 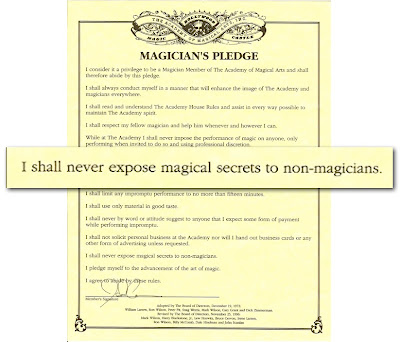 Thanks to Joseph Pecore for providing me with the pages in MUM that show the Houdini-Banning correspondance. You can read Houdini's original Popular Radio article in Patrick Culliton's Houdini The Key.
Written by John Cox at 6:54 AM