Today we have exciting news of a major new Houdini book coming in September. The Metamorphosis: The Apprenticeship of Harry Houdini by Bruce MacNab looks at Houdini's early years and his tour of Canada in 1896. Houdini's Canadian adventures are a specialty of Bruce's, and after many years of research, he has uncovered fresh new information. Cover art is not yet available, but I have tracked down the publisher's description: 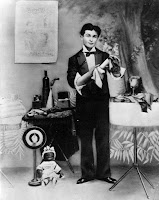 In May of 1896, a young magician from New York City joined the cast of the Marco Magic Company and embarked on a summer-long tour of eastern Canada, including New Brunswick and Nova Scotia. It was during this excursion that Handcuff Harry AKA Harry Houdini first showcased the talent that transformed him from a small-time conjurer, who performed for pennies in dime museums, into the world’s most celebrated escape artist. When he wasn’t performing on stage, Houdini was barnstorming through the streets of every town and city he visited, astounding onlookers in police stations, hardware stores and hospitals by freeing himself from the clutches of every restraining device strapped or wrapped around him. In this absorbing book, enriched by rare, period photographs, Bruce MacNab recounts a fascinating but shockingly untold chapter in the career of the man whose name is still synonymous with the word magic.


The Metamorphosis: The Apprenticeship of Harry Houdini will be published by Goose Lane Editions on September 28, 2012 and is available for pre-order on Amazon.com.

Perhaps this book will finally get down to the bottom of THIS.
Written by John Cox at 8:34 AM