Even though it was Houdini's brother, Hardeen, who graced the cover of Genii, The Conjurors Magazine in October 1943, this "Houdini Memorial Issue" marked an important moment in the history of Genii and Houdini as it was the first October issue following the deaths of Edward Saint and Bess. 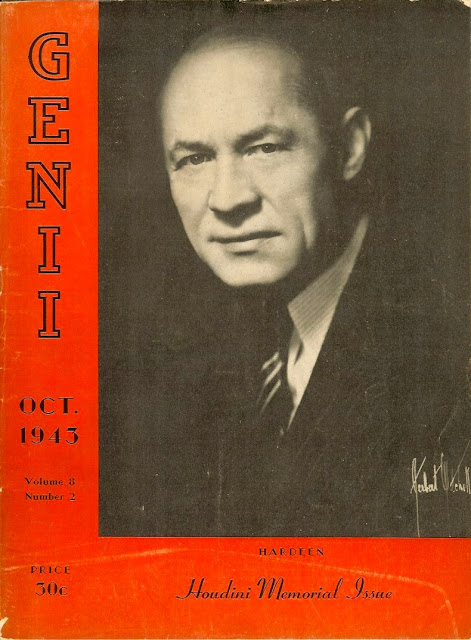 Ed Saint and Bessie were great friends of editor William Larsen and his wife Gerri, and had supported Genii from the start. Many of the articles and cover images had come from the "Houdini Archive" controlled by Ed Saint.

This issue includes an article about Bessie's final train ride written by her sister, Marie Hinson. It also looks at the surviving family, notably Hardeen and his sons, Lt. Harry Houdini Hardeen and Capt. Theodore Hardeen, Jr., both of whom were serving in the military at the time. The article notes that Houdini has one other living nephew, Col. M.S. White, "and they are all that is left of Houdini's immediate family."

The magazine also has a nice article titled, "Where Houdini Alive Today - What Would He Be Doing?" In it Fred Rickard predicted:

"He would already have made intensive investigations into television. He would have made all the proper contacts to insure him being the first magician to present a televised magic show to a really large television audience."

"Here would have been a chance for him to take up the cudgel and attack. Knowing the world as he knew it, and as he would have known it had his life been spared, it is certain that he would have intensely disapproved everything Nazi. What a thrill he would have had exposing the "Bund." 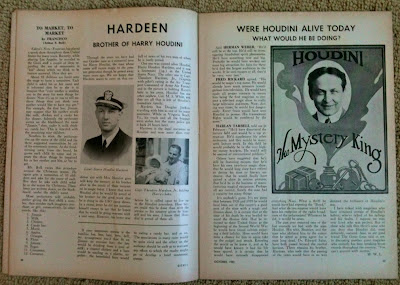 Having produced a Houdini cover every year expect one since its founding in 1936, this would be the last of the annual Houdini Memorial Issues of Genii. And when Houdini returned to the cover of Genii after a ten year absence, he would not quite be himself.

Click here for a complete list of all the Genii-Houdini cover issues.
Written by John Cox at 7:04 AM