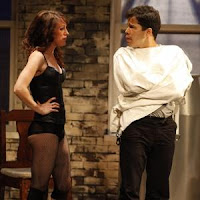 Escape, a comedic new off-Broadway play by Susan Mosakowski, is now playing at the La MaMa Theatre in New York. The play features the interactions of three couples, among them Houdini's grandson, Harry Houdini III, played by Carlo Alban, and his wife, Bess, played by Samantha Soule.

"Harry, who longs to follow in his famous grandfather’s footsteps, hopes to audition for the Ringling Brothers circus, but can’t extricate himself from anything. It’s up to Bess to pay the bills with her job at an S&M club.

The characters’ fates become entangled when Harry’s neighbors find the straitjacket and coffin that he’s thrown out in fits of disgust.

This daffy absurdist comedy has its moments, especially when the hapless Harry is rescued time and again by his patient wife.