Houdini and his Voisin

A postcard image of Houdini in his Voisin bi-plane in Australia has sold on eBay for $348.52. The auction received 17 bids. I've never seen this particular image of Houdini and his plane before. Note that his assistant, James Vickery, is in the shot. Looks like a dog also got in on the action. 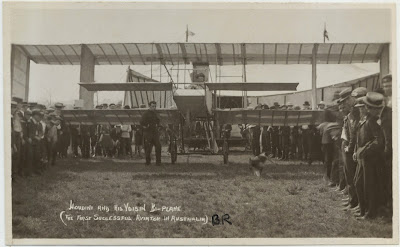 You can read about Houdini's historic first Australia flight here.
Written by John Cox at 12:16 PM