Houdini on being "not too tall" 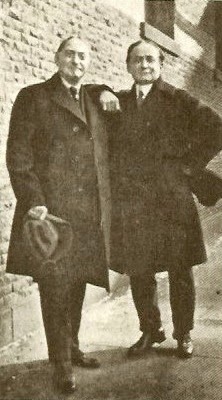 I once heard a recorded interview with a man who saw Houdini give one of his spiritualism lectures. He didn't know what Houdini looked like, and his first reaction on seeing the famous magician was; "Oh, he's a short guy."

Houdini stood 5 feet 5.276 inches (according to a 1926 physical). Until now, I've never heard Houdini make reference to height. But recently I spotted this paragraph in an interview with Houdini published in the Adelaide Daily Herald on April 16, 1910 while Houdini was touring Australia. Characteristically, he viewed his size as an advantage, especially in regards to athletics. Says Houdini:

"It is good for me that I am not a tall man. Why? Because I must be quick! and a tall man is always slow. It is so all through the profession. The best men are not too high. A tall man is easy going, good-natured; a short man is sometimes good-tempered, more often not so. All the mean, cunning men that I have known—short! All the keen, eager, ambitious men—short! And for work—the tall man has too much to carry, he is too far from the ground, he cannot lose and recover balance as it is necessary, in a flash."


In this same candid interview, Houdini gives more vital statistics (adding a couple inches to his height), and also addresses the perception of egotism:

"You will think that I am vain to tell you these things. But I am a Magyar, and Magyars are vain. American born. Magyar descended; my parents came from Austria; my father was a clergyman in Wisconsin. My name, Ehrich Weiss; my height about 5 ft. 7 in; weight about 12 stone; 36 this month of April. Only 36, but I feel old; I have done too much in order to be, in my poor little way, Columbus."


You can read the full interview by A.G. Stephens at Trove, an amazing archive of Australian newspapers created and maintained by the National Library of Australia.

Thanks to "Anonymous" who turned me onto Trove. Photo of T. Nelson Downs and Houdini (on tiptoes) from Houdini A Pictorial Life by Milbourne Christopher.
Written by John Cox at 10:11 AM