Houdini's most famous spirit medium exposure was that of Mina Crandon a.k.a. "Margery". Margery had passionate and powerful supporters in the spiritualist community, and their series of cantankerous seances in July 1924 made headlines across the country. Even after the seances -- and after Margery was denied the Scientific American prize for genuine mediumship -- challenges and accusations continued to fly, and newspapers continued to report on the famous rivalry.

In December 1925, this item appeared in newspapers across the country:

This was almost certainly planted by Houdini himself. Evidence of that is the fact that it calls out Margery by her real name, Mrs. Le Roy Crandon. The "curse" referred to here was a prediction made during a 1924 seance by Margery's spirit guide, Walter (her deceased brother), that Houdini had "but one more year to live." The curse was more specifically spelled out in the Hartford Courant on December 21, 1925. 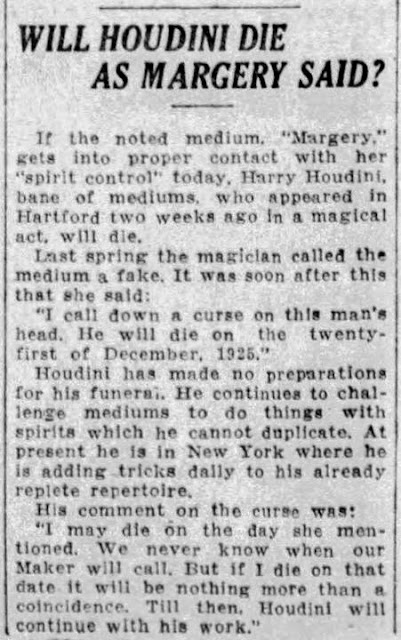 Margery denied all this, saying: "All talk by Houdini that spirits are plotting his death within a year is not only false but absurd. Why, I never heard of Black Magic. I regard his statement as a joke."

While Houdini survived 1925, the irony is that he would die within a year of Margery's statement, so to some it might have appeared the prophecy came to pass.

Curse? Coincidence? Just add it to the stew of intrigue that was the last year of Houdini's life.