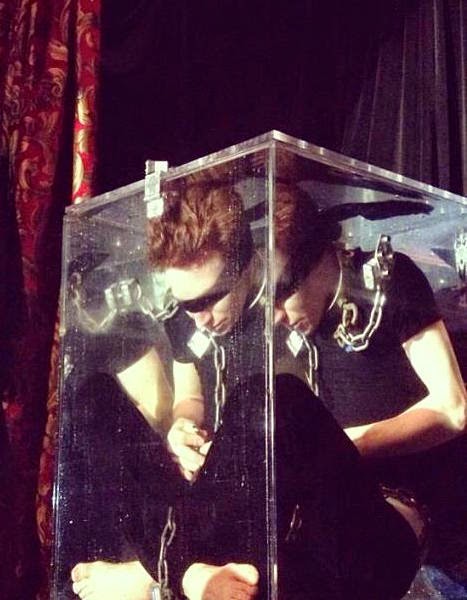 Spencer appears to have said there was "debate" whether Houdini ever actually performed his Water Torture Cell -- that he might have only ever had a poster made because the escape itself was "too dangerous."

Now, there's no way Spencer doesn't know that Houdini performed his Water Torture Cell for half his career. What I think happened is that Spencer was talking about Houdini's Buried Alive, and the show editors cut together his words to make it seem as if the Water Torture Cell was the subject. This is the danger of "reality" shows. They create whatever reality they require.

In other segments, our friend David Merlini performed a spectacular frozen-in-ice escape. This was an escape Houdini wanted to do but could never work out with the technology of his day. David's version seemed to be everything Houdini could have imagined, and I truly have no idea how he survived.

Michael Turco did a cleverly staged mine shaft escape. Escape artist Jan Rouven performed an inventive "Jaws of Death" suspended straitjacket, although I'm afraid it gets a thumbs down from me as Jan employed a blatant straitjacket fail.