No Hollywood producer tried harder or longer to make a movie about Houdini than Ray Stark. For more than three decades, Stark struggled to bring Houdini back to life on the big screen. Because he never succeeded, Stark's efforts and various approaches have gone largely unrecorded. So I thought it would be interesting to share details of the Ray Stark-Houdini saga in this update of an article I first penned for the Houdini Historical Center's newsletter "Mystifier" back in 1996. 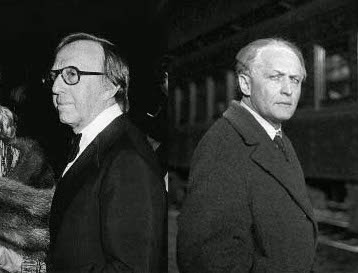 Ray Stark scored his first great success as a producer with the Broadway musical, Funny Girl, the story of Vaudevillian Fanny Brice (who happened to be Stark's mother-in-law). The 1964 musical jettisoned a then unknown Barbra Streisand to stardom. Stark would go on to produce a film version of Funny Girl (and a sequel, Funny Lady) and dozens of other acclaimed films, such as: The Way We Were, The Goodbye Girl, The Sunshine Boys, Robin and Marian, Smokey and the Bandit, Murder By Death, Annie, and Steel Magnolias. But one of the projects Ray Stark most wanted to make was a movie about Houdini.

Stark's first foray into the world of Houdini was in 1969 when he announced he would follow-up Funny Girl with a Broadway musical based on the life of Houdini called Hocus Pocus. Stark purchased the rights to William Lindsey Gresham's biography, Houdini: The Man Who Walked Through Walls, and commissioned Byron Cufnah to write a treatment and Bob Merrill to write the songs. Sam Denoff and Bill Persky would write the finished book. Stark called the production an "extravaganza" because of the size of the cast and complexity of the effects. It would even include a full size vanishing elephant. Then, as it was to do again and again, Ray Stark's Houdini project escaped the production charts. Hocus Pocus simply disappeared.

Five years later, Stark was back. Buoyed by his recent film successes, Stark decided to abandon the Houdini stage musical idea and instead turn the magician's life into a major motion picture. Stark teamed with producer John Houseman, who hired writer-director James Bridges (The Paper Chase) to develop The Magic Man: The Story of Houdini. Anthony Burgess, who once developed a Houdini musical with Orson Welles, was hired to pen the screenplay. James Caan, fresh off his success in The Godfather, was touted as the lead. On the strength of the talent involved, Columbia Pictures agreed to distribute the film.

Stark's reappearance was not without its careful timing. Only a week before, Paramount Pictures had announced a plan to make their own Houdini movie. Called simply Houdini, the film was to be based on the Harold Kellock biography Houdini, His Life Story, as had been their 1953 star vehicle for Tony Curtis. This time the Paramount film would be produced by William McCutcheon and RSO Films; shooting was set for early 1975. On Sept. 18, 1974, the showbiz trade paper Variety announced the rival projects with the headline, "Col Joins Par in Houdini Pic Race." Both pictures promised to be in production within the year.

A year came and went, and Paramount's Houdini never materialized. Meanwhile, Stark was having his own troubles. The producer was unsatisfied with the Burgess-Bridges drafts of The Magic Man, so he turned to screenwriter Carol Sobieski. However, Stark found her efforts too similar to the other scripts, all of which told Houdini's story in linear terms. Looking to break out of this form, Stark hired William Goodhart, a Broadway playwright and screenwriter with an interest in theology and the occult. Goodhart delivered what was said to be the most unusual of all the Houdini scripts, The Death/Birth of Houdini. But the studio feared the new script was too similar to Bob Fosse's semi-autobiographical All That Jazz, then in development across town at 20th Century Fox. Stark also found Goodhart's script unsatisfying.

Stark then decided to take a bold new approach. He would abandon the biopic concept entirely and create a fictional Houdini adventure. To do so, Stark hired William Hjortsberg who turned in two film treatments. One was a metaphysical time travel fantasy; the other a murder mystery similar to the Sherlock Holmes vehicle, The Seven Per-Cent Solution. Neither of the Hjortsberg treatments were turned into full scripts. (In 1994 Hjortsberg published the book, Nevermore, in which Houdini and Sir Arthur Conan Doyle track a serial killer in New York.) Stark then returned to his original idea of doing a Houdini stage musical. He supplied test funds to New York-based director and choreographer Elizabeth Swados, but the results were discouraging.

Why was it not working? How could so many talented writers fail to break Houdini free of what Hollywood calls "development hell"? In a private memo, Stark confessed his fear that magic and escape artistry may not register alongside modern special effects. Journalist Jeffrey Wells -- hired by Stark to author a critical overview of the Houdini project -- suggested that maybe Houdini's life "simply doesn't add up to strong drama, or that his character is too prudish and Victorian to find favor among today's audiences."

But in a letter to the LA Times, James "the Amazing" Randi argued that finding an exciting plot in the life of Harry Houdini was "about as demanding as discovering a sports theme in the Babe Ruth story." He argued that Stark "would do well to represent the true story of Harry Houdini, a story that needs no Hollywood fabrications."

Stark and his efforts to make his Houdini movie went dormant for much of the 1980s. One writer-director Stark did meet with was Nicholas Meyer, who had scored great success with Star Trek II: The Wrath of Kahn. But Meyer told the producer he would only do his Houdini project if Stark optioned his father's book, Houdini: A Mind in Chains. Stark was not interested in the quid pro quo deal and nothing ever came of their meetings. (Meyer would eventually make that deal with producer Gerald Abrams and write the Houdini miniseries in 2014.)

In the early 1990s, Ray Stark and his Houdini project made a dramatic reappearance when director Robert Zemeckis signed aboard what was now called The Great Houdini. Screenwriters Peter Seamen & Jeffrey Price would pen a new script that would tell Houdini's story as "a magical special effects-laden adventure." Tom Cruise was the favorite for the lead. The film's huge budget was to be split by Columbia Pictures and Universal -- Columbia getting the U.S. distribution, and Universal the foreign. The project at long last appeared on production charts as a "go" picture. It finally looked like Houdini was free.

But on September 23, 1992, a headline in Variety spelled out Stark's worst nightmare: "Houdini Eludes Zemeckis." Even though the director called the Seamen and Price script "the most interesting, dynamic, and most filmic of all the versions," he admitted he wasn't "100 percent certain what direction the project needs to take." Stark himself was less diplomatic: "We are not satisfied with the script that was developed, but I assume we will be working on a new draft very shortly with Zemeckis." His assumption was wrong. Zemeckis went on to direct Forrest Gump and win the Academy Award, while The Great Houdini went back to "development hell."


Hoping to persuade Zemeckis to return, Columbia chairman Mark Canton made reviving the Houdini project a top priority. Sean Connery had just agreed to star as Robert-Houdin in the action/adventure-oriented Smoke & Mirrors, and HBO had purchased the new Ruth Brandon biography The Life and Many Deaths of Harry Houdini for possible adaptation. With rival projects looming, Stark's production company Rastar worked overtime to create a new Houdini screenplay. Eager screenwriters churned out Houdini "spec" scripts (scripts written without a contract in an attempt to make an outright sale) -- but none sufficiently captured the essence of the great magician for Stark. (Even I took a general meeting with Stark's company in my early screenwriting days. I recall a copy of the Silverman biography on their coffee table). Finally, screenwriter Anna Hamilton Phelan (Gorillas in the Mist) was commissioned to take a crack at the story.

After meeting with renowned San Francisco medium Carter Austremuhl, Phelan came back with an approach to tell Houdini's story as a battle with the mystical -- how his obsession with death and the unknown traced back to his strict rabbinical father, "who forbade discussion of all things magical." In August, Michael Fleming reported in his Variety "Dish" column that Phelan had "pulled a rabbit out of her hat and turned in a script that Stark and the studio execs love" and that a spring 1996 start was anticipated. But the truth was Phelan hadn't even turned in a draft. The article was just a clever bit of misdirection by Stark to scare away the competition and buy time for a fresh approach.

The writers who would eventually deliver that fresh approach, and a finished script, were Stephen J. Rivele and Christopher Wilkinson. The veteran scribes, who had tackled Nixon for Oliver Stone in 1995, focused their story on Houdini's famous confrontation with the medium Mina "Margery" Crandon. The thrilleresque script blended fact with fiction and offered some dramatic recreations of not only the Margery sittings, but also the Water Torture Cell, Buried Alive, and the Russia Transport Prison Van escape. The movie opened with a dramatic depiction of Houdini's famous sea monster challenge (below).


The Rivele and Wilkinson script captured the attention of director Paul Verhoeven who signed aboard the project in September 1997 after two months of negotiations. "I'm not a fan of Houdini, but not an anti-fan, either," said the director. While it had been reported the studio would "go right to Tom Cruise to play the master magician," now it was said that studio was in discussions with "two or three major stars." An optimistic Columbia Pictures announced their intentions to begin production in early 1998 for a Christmas release that same year.

However, a year after Verhoeven joined the project, he suddenly departed, explaining to trades, "Houdini's spiritual life was all about his mother when she was alive and when she was dead, and I just couldn't solve that and make it a movie."

Undeterred, Columbia announced that Ang Lee was now at the top of their list to replace Verhoeven on the "high-profile biopic." However, a deal with Lee was never made. Meetings with screenwriter David Webb Peoples also proved unfruitful. But Stark was not giving up. In 2004, he was still talking about his Houdini movie and claimed that he still had Tom Cruise attached as the lead.

On January 17, 2004, Ray Stark passed away in his home in West Hollywood of heart failure. He was 89. With Stark went his dream of making a big budget Houdini movie.