"Houdini must have been crazy to do this."

Recently I discovered some old cassette tapes I made as a kid, and on one I found a radio interview with the legendary Doug Henning. This appears to have been recorded in 1980 when he was preparing for a new tour that would kick off at the Los Angeles Pantages theater (a show I saw). 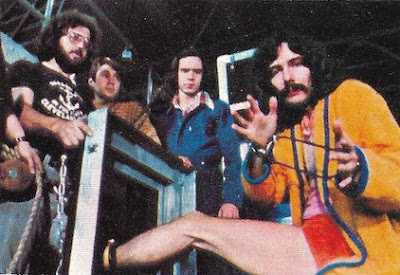 In the interview, Doug talks about performing Houdini's Water Torture Cell on his first television special in December 1975, and how he had a close call that night.

I hit record when the topic turned to Houdini, so it picks up as Doug is talking about looking through some Houdini material provided by his niece (Ruth Kavanagh). Enjoy.

Henning actually revived the Water Torture Cell for this run at the Pantages in 1980. According to the excellent Spellbound: The Wonder-Filled Life of Doug Henning by John Harrison, his first show went fine. But during the second performance, he panicked and had another close call. His lead assistant Nanci Hammond said, "The Water Torture Cell was very hard for him to do. He was really afraid that he was going to die doing it."

After the mishap, Henning's manager and the company staged an "intervention" and convinced Henning to cut the escape for good, which he did.

Below are links to anniversary coverage of Henning's first three live television specials, each of which featured an iconic Houdini feat.