The Girl Who Handcuffed Houdini #4 released

The fourth and final issue of the adult comic Minky Woodcock: The Girl Who Handcuffed Houdini by Cynthia von Buhler is released today by Hard Case Crime and Titan Books. Issue 4 comes in two variant covers; one with art by Dean Haspiel and the other by Cynthia von Buhler. 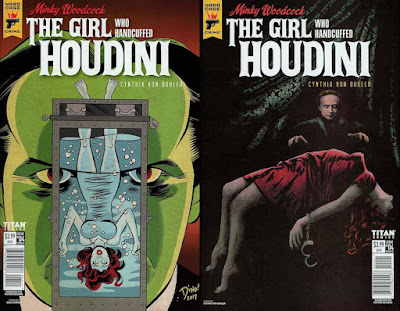 
You can buy all four issues of Minky Woodcock: The Girl Who Handcuffed Houdini at Midtown Comics. A collected edition will be released July 24 and can be pre-ordered now at Amazon.com.

Cynthia von Buhler has hinted on her Facebook and Twitter that there is movie interest in the series. For more visit minkywoodcock.com.