In 1952 Paramount launched what it claimed was a "worldwide talent search" for the actor who would play Houdini in their upcoming biopic. I'm expect this was more ballyhoo than a genuine search (Tony Curtis was announced in July), but here's a news item that appeared in several newspapers across the country at the time. This is terrific for a number of reasons. 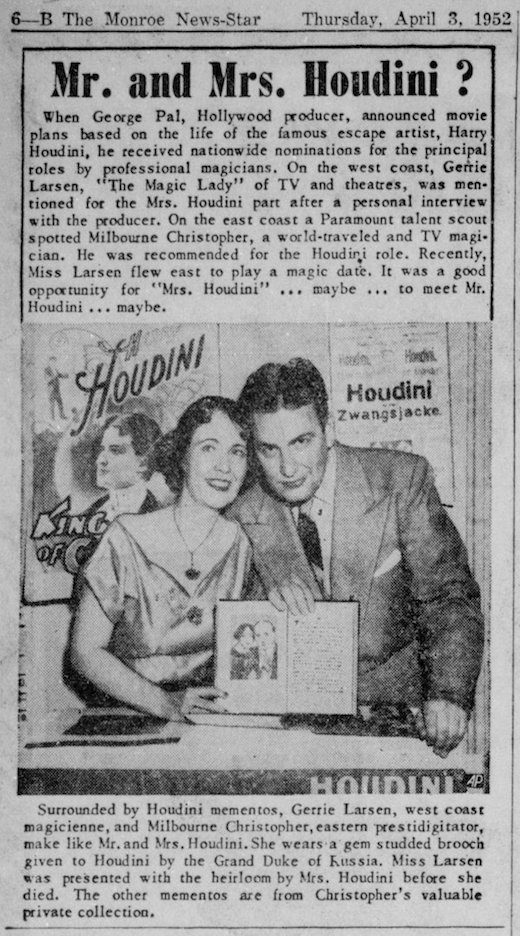 Of course, Milbourne Christopher was one of the greatest of all Houdini and magic historians, and would go on to write Houdini The Untold Story in 1969. He would also finally play Houdini on stage in 1976. And Gerrie Larsen was the mother of Bill and Milt Larsen who founded The Magic Castle in Hollywood.

I actually think they make a pretty good Harry and Bess!

But there's another reason I like this clipping. You'll note that it mentions Gerrie's famous Royal Crown brooch, given to her by Bess Houdini. That brooch sold last year in auction to David Copperfield for $72,000. The brooch and sale was the subject of a recent episode of Strange Inheritance with Jamie Colby, on which I appeared to suggest that the brooch did not come from Czar Nicholas II, as had been long claimed by the family, but more likely came from the Grand Duke (Sergei Alexsandrovich). Well, this article confirms exactly that!

I'm now thinking neither Bess nor Gerrie ever claimed the brooch had come from the Czar. I expect over the years the family just misremembered what their mother had told them. Hey, it's hard to keep all those Russian royals straight!