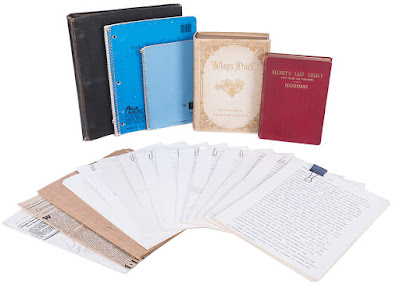 An archive of unseen material from Elliot Sanford, a previously unknown member of the Houdini troop, sold for a whopping $48,000 (including 20% buyers premium) at Potter & Potter's Spring Magic Auction today. I had called this possibly the most historically significant Houdini auction lot ever, and it certainly got attention, blowing way past the pre-auction estimate of $15,000-$20,000.

Sanford joined the Houdini show in the final weeks of the magician's life and was eyewitness to all that occurred before and after Houdini's death. He was also one of the pallbearers at Houdini's funeral. Included in the lot is an unpublished manuscript Sanford wrote detailing his time spent with the Houdinis. The material had been held by Sanford's family and, incredibly, has never been read by any Houdini biographer. What's contained in these pages could greatly enhance our knowledge of Houdini's final days.

The auction contained a variety of other Houdiniana. Two annotated Houdini spiritualism scrapbooks from the Joe Dunninger collection brought in a hefty $66,000 (estimate $30,000-$40,000). An attractive 1905 color playbill with nice mentions of the Mirror Challenge and the Prison Cell & Barrel Mystery fetched $7,200. A box of photographic negatives labeled "Houdini in Atlantic City" found $5,280. A photo of Hardeen wearing what might be Houdini's iron bar shackles (a little discussed early invention) unlocked $780. 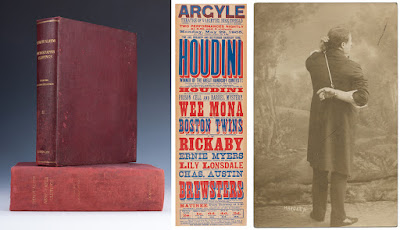 I had my eye on two unpublished original photos, both of which sold beyond their estimates. One shows Houdini and Dr. A.M. Wilson clowning with a "No Parking" sign outside an Orpheum Theater ($2,280). The other shows Bess as a fortune teller ($660). The story of Houdini and Wilson's famous feud is a favorite of mine. I have no idea what the story is behind the Bessie photo. 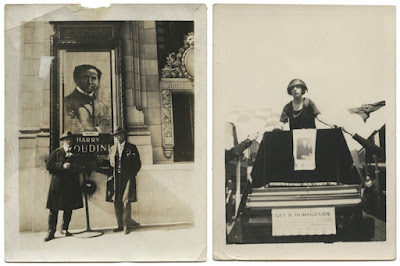 A pair of alleged Houdini throwing knives, which have made the reality show rounds over the past few years, failed to get any bids. (I was surprised to even see these in this auction.)

As always, congrats to all the buyers and sellers!