Houdini in the reptile house 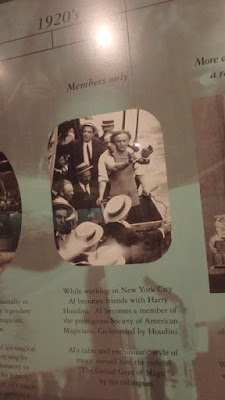 This just goes to show Houdini can appear anywhere -- even the reptile house of a zoo!

CALM (California Living Museum), located in Bakersfield, California, has an exhibit honoring magician Al Robbins, who worked with live rattlesnakes in his vaudeville act and was a reptile expert. The Al Robbins Herpetological Center holds many of the specimens Al collected through the years, along with a timeline of his life. As you can see by the photo on the right, that timeline includes his friendship with Houdini.

Born Dec. 25, 1902, Robbins performed magic for over 70 years. In 1948 he moved to Bakersfield and became Dean of the Bakersfield Magic Circle - part of the parent group of the Society of American Magicians. Al Robbins died in 2000. As far as I know, he was never interviewed about his memories of Houdini.

For more details about CALM (California Living Museum) check out their official website. Below are links to a few more Houdini appearances in unexpected places.

Thanks to Athena Stamos for this discovery and the pic.

Email ThisBlogThis!Share to TwitterShare to FacebookShare to Pinterest
Tags: Museums, Other magicians, S.A.M.