The most historically significant Houdini auction lot EVER? 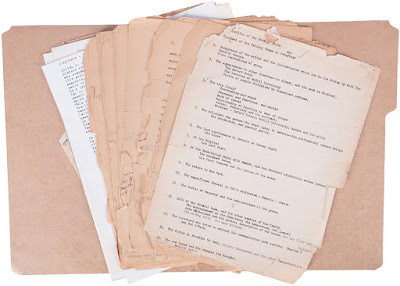 Potter & Potter Auctions has released the online catalog for their upcoming Spring Magic Auction and it contains a wealth of Houdiniana. Chief among the lots are two recently discovered Houdini spiritualism scrapbooks from the Dunninger collection. Those are expected to fetch a very high price. However, it's Lot 360 that has me losing my mind this morning!

Lot 360 is "Elliot Sanford’s Houdini Manuscripts and Archive." The hitherto unknown Sanford worked as Houdini's secretary in the final weeks of the magician's life and was eyewitness to all that occurred before and after Houdini's death. He was also one of the pallbearers at Houdini's funeral (so identified in Christopher's Houdini The Untold Story, which is the only biography to mention him). Among letters, books, and postcards given to Sanford by both Harry and Bess is an unpublished manuscript he wrote detailing his time spent with the Houdinis. Here's just part of the mind bending auction description:

The manuscripts total over 100 pages, both holographic and typewritten, and are filled with tantalizing looks inside the Houdini home, Houdini’s ill-fated final tour of America, including the fateful episode in Montreal that would cost Houdini his life. Other elements discussed include the Weiss and Rahner families, the aftermath of Houdini’s death, and even the magician’s finances and the nature of his estate and how it was dealt with after his untimely passing. Various drafts and outlines, both typewritten and handwritten are included. In all, an archive of historical significance, filled with tantalizing unpublished data and anecdotes regarding the most famous magician the world has ever known. Sanford began working for Houdini as his business secretary in the last weeks of the magician’s life. His story, told in these pages, but as yet unpublished, describes in minute detail his time with the great magician, from the moment of his first interview for a position as assistant in Houdini’s dressing room, to the time of the fateful death blow delivered to Houdini in Montreal, and beyond. Sanford had a front row seat to these moments in history and recounts them in great detail in the pages of his unpublished memoir, offered here for public sale for the first time. The material in these pages has been virtually unknown until now and is an un-mined trove of lore not incorporated in to any published Houdini biography.


While rare posters and original props will always fetch the highest auction prices and cause the greatest stir, this is the kind of thing I consider a true treasure. A poster doesn't really tell us anything new about Houdini. But these pages hold the possibility of rewriting Houdini history, or at least enhancing our understanding of those critical last weeks and their aftermath.

Might they reveal whether Houdini was ill before Montreal? Might they provide new insight into Bess's substance abuse? Just looking at the sample pages melts my brain. A "near-accident" at Houdini's grave? The "lab" on the top floor of 278? Depending on what these pages contain, yes, this could very well be the most historically significant Houdini auction lot...ever! 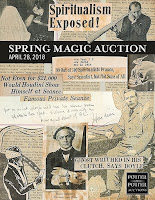 Potter & Potter's Spring Magic Auction will be held April 28, 2018 starting at 10:00 AM. Previews take place at Potter & Potter's Chicago gallery April 26 & 27, from 10:00am to 5:00pm. The printed auction catalog, which sports a terrific Houdini cover (right), will ship approximately three weeks prior to the auction.