Inescapable: The Life and Legacy of Harry Houdini

The Jewish Museum of Maryland has released details of their upcoming Houdini exhibition, Inescapable: The Life and Legacy of Harry Houdini, curated by local magician and performer David London. 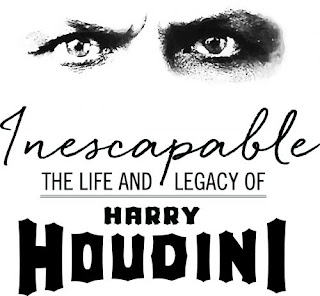 Inescapable, curated by local performer and magician David London, tells the story of how Ehrich Weiss became Harry Houdini and investigates the technologies, marketing prowess and entertainment trends that transformed him into a superstar. On one level, the exhibit is pure fun – incorporating magic, escapes, seances, films, rare artifacts and hands-on illusions. On a deeper level, the exhibit pulls back the curtain, revealing the story of the man behind the image.

In addition to the exploration of his early life, visitors will find sections illuminating stages of his life and career:

Throughout the exhibit, visitors also will have the opportunity to try out some of Houdini’s magic tricks, including the world’s smallest version of Houdini’s biggest illusion – making a five-ton elephant “vanish.”


The museum has also revealed a slate of related public programs, one of which features yours truly:


Inescapable: The Life and Legacy of Harry Houdini runs June 24, 2018 to January 21, 2019. For more information visit the Jewish Museum of Maryland website.