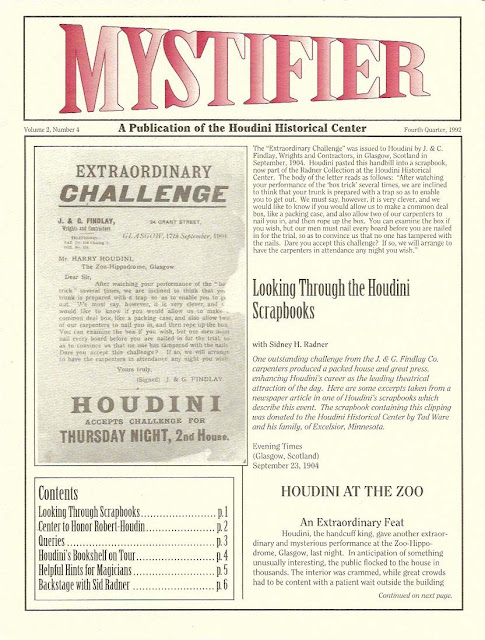 The Fourth Quarter 1992 Mystifier is a standout issue in that it reprints a full account of a challenge packing crate escape at the Zoo-Hippodrome in Glasgow in 1904. This challenge had an interesting added element, as you can read below:

During the day representatives of the firm had visited the Zoo and complained that there was a trap door on the stage. They proposed to erect a platform on which the packing case should be placed. To that Houdini had no objections, so he called upon the carpenters present to proceed to business, and the band played. Four tradesmen immediately threw off their coats. Long stout beams were dragged on to the stage, and they set to work with hammer and nails to baffle, if possible, the daring performer. The music of the orchestra was almost drowned in the noise of the active woodworkers. By and by the platform was completed. It was about a couple of feet high, supported by struts, so that a clear view of the stage floor could be obtained underneath.


The newsletter continues with an article by Tom Boldt about the newly opened La Maison de Robert-Houdin-Centre National des Arts de la Magie et de I'illusion in Blois, France. A Christmas greeting from Houdini's December 1907 issue of the Conjurer's Magazine is reprinted along with "Helpful Hints for Young Magicians Under Eighty" from the August 12, 1908 issue.

Regular contributor Dr. Morris N. Young then provides an interesting article about the books Houdini traveled with on tour in 1911. Among the some 19 mentioned books that Houdini felt were important enough to keep with him at all times are curiosities such as The International Scientific Series Animal Locomotion and Grimms Fairy Tales.

In "Backstage with Sidney Radner", Sid reports on the recent discovery of a large cache of uncatalogued Houdini material in the Library of Congress. Incredibly, this material had remained unboxed since its arrival in 1927! Sid talks about meeting Dorothy Young for the first time at the 1992 Official Houdini Seance at the Houdini Magical Hall of Fame. He says that the BBC and National Geographic are both working on Houdini documentaries. Sid also notes that the first volume of Frank Koval's Illustrated Houdini Research Diary -- "an absolute must for Houdini researchers" -- is available from the museum shop for $20. So too is Pat Culliton's Houdini's Strange Tales.

Sid finishes by reporting that David Copperfield visited Appleton and the Houdini Historical Center on November 19, 1992, and "gave us a very generous plug during his performance in nearby Neenah, for which we give great thanks."

Thanks to Gary Hunt of Handcuff Queens for providing me with this issue.