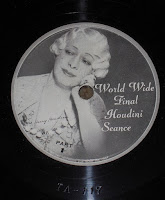 The mighty Arthur Moses shares with us today his recent acquisition of what appears to be the original release of the "World Wide Final Houdini Seance" on record. Until now, I was only aware of the 1959 Hudson Records release and 1975 release by Mark56 (both can be seen here).

This is a 3 album set of 78rpm. Arthur isn't sure what year it was produced, but he knows it was sold through Thayer's in Los Angeles, and by the postage on the original shipping box he's determined that it was sold during or after 1938. Aside from that, this set is a bit of a mystery.

Does anyone out there have any addition information they can share about this release? 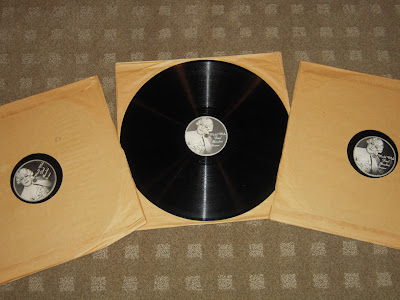 Thanks to Arthur for sharing this terrific find.

UPDATE: Joseph Pecore has discovered the original ad for this record in the December 1939 issue of Genii. Thank you, Joe!