Yes, Houdini was a Mason 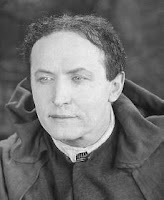 The Mill Valley Masonic Lodge No. 356 has an interesting article on their website about "Masons and Magicians." So many of the great magicians from the Golden Age of Magic were Freemasons, including Houdini.

According to the article, "Bro. Houdini" was initiated as an Entered Apprentice on July 17, 1923 in St. Cecile Lodge No 568 in New York City. He passed to the degree of Fellowcraft on July 31, 1923, and was raised to the Degree of Master Mason on August 21, 1923. In 1924 he entered the Consistory, which is the fourth and final degree in the Scottish Rite.

Houdini's masonic activities included giving a benefit performance for the Valley of New York which filled the 4,000 seat Scottish Rite Cathedral and raised thousands of dollars. In October 1926, just weeks prior to his death, he became a Shriner in Mecca Temple. His last rites, held November 4, 1926 at the Elks Clubhouse in New York, concluded with traditional Masonic Rites.

You can read more about the Masonic Magicians at mill-valley.freemasonry.biz.
UPDATE: It appears some of the information in this article is not correct. For the most up to date facts on Houdini the Mason please see: Guest Blog: Author-Lecturer-Mystifier-Mason.
Written by John Cox at 11:27 AM