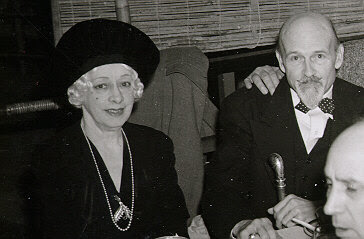 Recently while fleshing out the A.D. page of my New Houdini Chronology, I found this curious item in Ed Sullivan's 1938 Hollywood gossip column:

So is this where the marriage rumor got started? Possibly. But it makes no mention of Saint. Should we accept Bess's word that it isn't true? Or does this item present evidence it might have been true. At least this shows us the idea of a secret marriage was in the air ever at that time.

The date, April 19, 1938, might be suggestive. This is right around the time Bess and Ed began to have some middling success in the movies. Bess had just shot Religious Racketeers, and they had recently set-up a Houdini biopic at Paramount. So maybe they married in anticipation of a expected windfall of cash? Possibly it was more about consolidated assets than romance.

Arnold Furst's recollections of Bess and Ed can be read in David Charvet's excellent cover profile of Bess Houdini in the October 1995 issue of MAGIC.