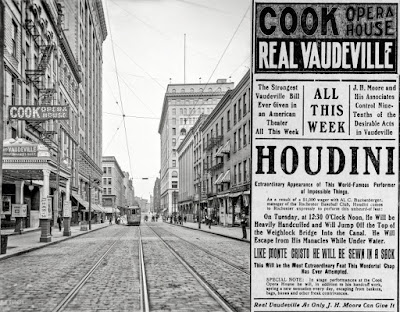 Houdini's jump from the Weighlock Bridge in Rochester, New York, on May 7, 1907 is best known for being the earliest surviving film footage of Houdini in action. And that's about all it's known for. However, this jump had a lot of very interesting aspects that have gone largely unrecorded in biographies. So let's tell the full story!

Houdini came to Rochester for a one week engagement starting May 6, 1907 at Cook Opera House. According to the Rochester Democrat and Chronicle, he was there in part to settle a bet with Al C. Buckenberger, manager of the Rochester baseball club. As the story ran, the previous winter Houdini had boasted that he could jump manacled from the Weighlock Bridge and free himself underwater. Buckenberger bet him $1000 he could not. Weather conditions at the time made the test impossible. Now Houdini was there to make good on the wager, despite "still not ideal" conditions. Interestingly, the papers reported that Houdini would not only be handcuffed, but also "sewn into a sack like Monte Cristo." 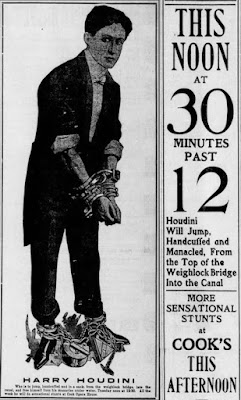 Houdini spent a week in preparations for the jump at his home in New York City. The year before he had gotten a cramp when he jumped from the Belle Isle Bridge into the freezing Detroit river. Now he was resolved to prepare his body for the cold. He began taking a series of ice baths, working his way down to a temperature below 40 degrees. ("Gee it's cold," he recorded in his diary.) His baths where overseen by his physician brother, Dr. Leopold Weiss.

"Houdini must be in splendid condition or he would never attempt such a performance," a Rochester doctor told the newspaper. "A sudden jump into this icy bath means a tremendous shock to his nervous system. He'll be shakin', and he'll need a beer when he comes upon the land, unless I am greatly mistaken."

The papers also reported that Houdini's mother was "greatly concerned at the prospect of her son's hazardous performance" and that "she decided to come to Rochester with him, and will be on the scene when he jumps from the bridge." This is a rare mention of Houdini's mother attending an outdoor stunt. But there is a famous photo of Houdini and Mama on a Rochester street, with Houdini kissing her on the cheek. (Houdini later misdated the photo as 1908.) 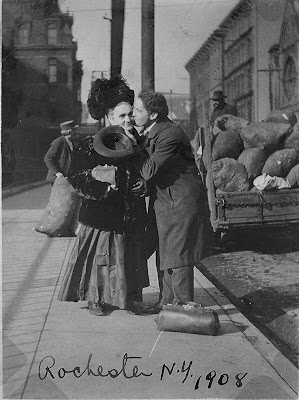 Cook Opera House did a fine job promoting the stunt, running continuous ads both large and small in the papers. One dramatic ad ran the length of an entire page.

The day before the stunt, Houdini visited the bridge with reporters and did a practice jump without handcuffs. This, he explained, was so he could test the water temperature and depth. "He got plenty of information about the bottom," the papers reported the next day. "When he climbed out he was covered in mud up to his knees." Because of this, Houdini decided to abandon the idea of being sewn into a sack (if he was ever serious about it). "I hardly think I shall be able to use a sack, as the deep mud would make it almost impossible to extricate myself from it," he explained.

This practice test is a curious thing, but it appears to have been a regular feature of Houdini's early bridge jumps. Before jumping into the Allegeg from the Seventh Street bridge a week later, he also did a practice jump. 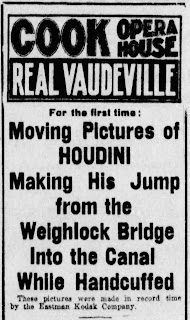 The day of the jump a reported 10,000 onlookers gathered along the canal. Police kept people from crowding onto the narrow bridge itself, saying it was too dangerous. Houdini arrived at 12:30 and stripped down to a pair of white shorts. He was then manacled by a police officer with two pair of handcuffs. He climbed to the top of the bridge truss, and jumped. Fifteen seconds later he was free and swimming to shore, balancing the handcuffs on top of his head so he could swim with both arms.

For all the hype, the escape itself received a somewhat modest report in the Democrat and Chronicle under the headline "Handcuffed, Leaps into Canal." The paper didn't run any photographs, but on that score, Houdini had made his own arrangements.

Houdini had employed Eastman Kodak to film the escape. The company appears to have used two cameras, one on the bridge with Houdini during his shackling, beautifully capturing Houdini in his prime, and the other from a distance to film the jump. (Or it's possible the cameraman relocated for the jump as there is no other cameraman visible on the bridge in the long shot.) The speedy film developing was a magic trick in itself, and on the night of May 9th, the film was shown to audiences at Cook Opera House.

Incredibly, the film has survived. And here it is:

The exact location of Houdini's jump is a little hard to fathom today. "Weighlock Bridge" was not a formal name, but more of a description -- the bridge over the weighlock. But the weighlocks are still there, and newspapers accounts say the bridge being near Court Street, so the below is a likely candidate. 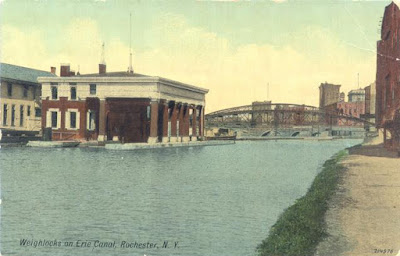 Houdini finished out his week in Rochester with challenge escapes. He then moved on to Buffalo where, no doubt, he exhibited his escape footage. In fact, Houdini would continue to film his outdoor stunts and show them before his act for the remainder of his career. So Rochester was a true first in that regard.

But for Houdini personally, the Rochester escape was most memorable for one reason. That night he wrote in his diary, "Ma saw me jump!"