Bessie and the Colonel 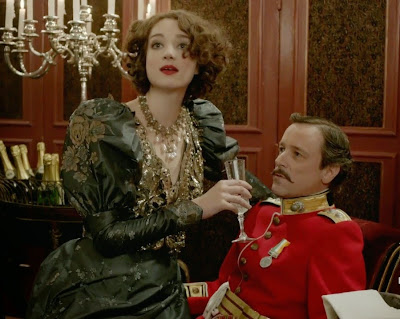 Remember that scene in the Houdini miniseries in which Bess (Kristen Connolly) sits on the lap of a soldier at a party and Houdini (Adrien Brody) goes to pieces? Believe it or not, this is based on a real event. The curious story was first told in Harold Kelock's 1927 biography Houdini His Life Story as follows:

Once and once only did Mrs. Houdini venture in a small way to put Houdini's personal jealousy to the test. They were at a party at which the pace was a bit swifter than at those they commonly attended. A certain colonel invited Mrs. Houdini to sit on his knee and drink a glass of champagne with him. The colonel and his knee had no attraction for Mrs. Houdini, but she was seized with a whimsical desire to see how Houdini would react to such a performance. A few minutes later, when Houdini entered the room, the scene was set. Mrs. Houdini was sipping her champagne and gazing roguishly up at the colonel, and his arm was about her waist.

Houdini stopped sharply in the doorway with an expression of incredulous horror on his face that his wife never forgot. His knees sagged as if he had received a knockout blow. Mrs. Houdini rushed to him and helped him to a chair. He could hardly speak. She helped him into a taxi and into their lodgings. None of her explanations could lift him from his utter prostration of spirit. He wept bitterly far into the night. For days he dragged himself about, brooding and dejected.

Weeks afterward they were dining with friends at a hotel. In the party was a young lieutenant in dress uniform. A passing waiter slipped and spilled the contents of nineteen cocktail glasses over this resplendent young man. As he stood up mopping himself off, he remarked, with mock concern: "I wonder what the colonel would say?"

At the words "the colonel," Houdini pushed aside his knife and fork and an expression of deep gloom over-spread his face. His evening was ruined. Mrs. Houdini had to take him home before he spoiled the occasion for every one else.


The story of Bess and the colonel also appears in Houdini: A Mind in Chains by Bernard C. Meyer, the book on which the Houdini miniseries was based (the author is screenwriter Nicholas Meyer's father). This incident is ripe for a psychological read, and Dr. Meyer observes: "It was as though the nightmare of abandonment had come true."

Bess had an adventurous spirit, and while I don't believe she was ever unfaithful to her husband, she did enjoy her flirtations and escapades. In a taped interview, her sister Marie recalled how when she and Bess would go out dancing, Bess would tell men they were single girls. After they had gotten their fill of attention and a box of candy "for their mother," they would excuse themselves to the ladies room and then "beat it."

"Houdini never knew she did that," says Marie. "She was a devil." 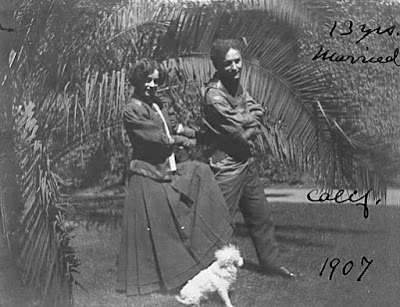 TOMORROW we'll continue our look at the Houdinis marriage with an affectionate letter from Harry to Bess that I don't believe has ever been published before.