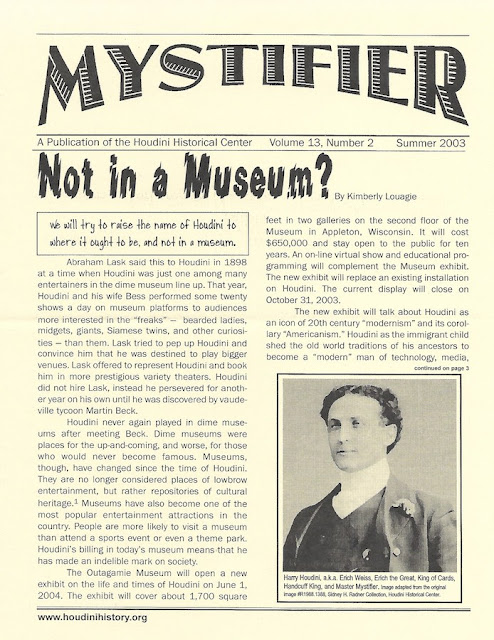 The Summer 2003 Mystifier is largely made up of an article by Curator Kimberly Louagie describing what to expect from the museum's new "AKA Houdini" exhibit set to open on June 1, 2004.

The approach taken to the new exhibit is based in part on front-end surveys of the Museum's membership (including Houdini Historical Center and Outagamie County Historical Society members). Respondents to the surveys rated their interest in Houdini's escapes, his stages of life, his personal relationships, and historical forces affecting his life and career. A majority of respondents favored a heavy use of interactives and wanted to know how Houdini performed his tricks. The most popular description of Houdini was a "showman" and the most common reason for remembering Houdini was his contributions to magic.


The newsletter also contains an obituary for Lee Jacobs, who passed away on April 18, 2003. Jacobs specialized in reproductions and is responsible for several well-known Houdini posters, most famously his "King of Cards" which hung on everyone's bedroom wall (including mine).

In what would be his last "Backstage" column, Sid discusses the book Lily Dale by Christine Wicker about the famous spiritualist community. Sid talks about his own visit and how the resident medium employed a cold reading technique, but was still unable to divine a single correct deal about Sid or his wife. "No more comment is needed," says Sid.

The newsletter concludes with an announcement of Appleton's "Houdini Day" on August 29 & 30, and a humorous story called "The Magician and the Parrot."

Contents:
Not un a Museum?
Lee Jacobs R.I.P.
Backstage with Sid Radner
Houdini Day
The Magician and the Parrot