Today we kick off our look back at the Mystifier, the newsletter of the Houdini Historical Center that ran from 1991-2003. In many ways, this was the forerunner of blogs like WILD ABOUT HARRY. 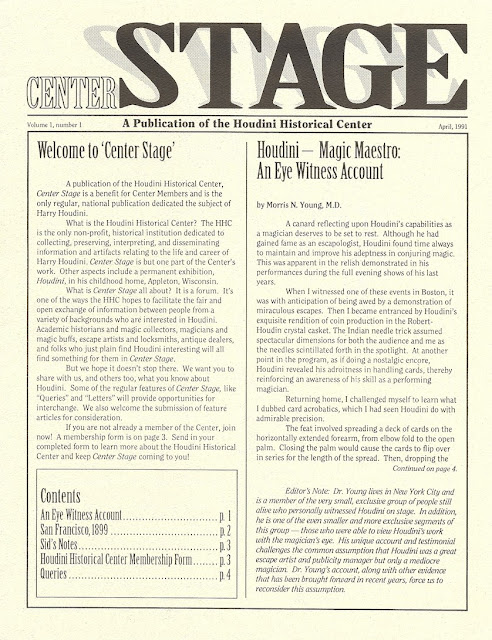 The Houdini Historical Center's Mystifier newsletter began life as "Center Stage." Volume 1, Number 1 was published in April 1991. On it's front page was an introduction, "Welcome to Center Stage", which laid out its mission statement:

What is Center Stage all about? It is a forum. It's one of the ways the HHC hopes to facilitate the fair and open exchange of information between people from a variety of backgrounds who are interested in Houdini. Academic historians and magic collectors, magicians and magic buffs, escape artists and locksmiths, antique dealers, and folks who just plain find Houdini interesting will all find something for them in Center Stage.


True to their word, the first feature article by Dr. Morris N. Young is a rare treat. Young gives "An Eye Witness Account" of seeing Houdini in Boston when he was a youth. Young notes that while he went in expecting to be dazzled by Houdini's escape feats, he came away most impressed with his magic, notably what Young called his "card acrobatics." This eyewitness assessment of Houdini's magic led to a special editor's note:

His unique account and testimonial challenges the common assumption that Houdini was a great escape artist and publicity manager but only a mediocre magician. Dr. Young's account, along with other evidence that had been brought forward in recent years, force us to reconsider this assumption.


The second feature, "From The Sidney H. Radner Collection", showcases a newspaper clipping from 1899 about Houdini's escape from handcuffs in a San Fransisco police station. The article contains a terrific illustration of Houdini standing on a table surrounded by officers.

In "Sid's Notes", Radner explains how his collection came to find its new home in Appleton in 1988.

When then-Outagamie Museum Curator Christopher Miller arrived at my home to examine my collection, I knew immediately that I had made a sensible decision. Chris arrived with white cotton gloves–-explaining to me why these artifacts should not be touched by human hands. I was thoroughly impressed. Only gloved hands have touched the collection since.