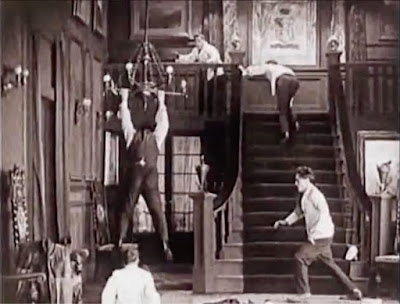 It's well-known that Houdini broke his wrist while filming The Grim Game in Hollywood in 1919. But what isn't as well-known is that Houdini fractured that same wrist a year earlier while making The Master Mystery in Yonkers. Below is an article from the August 13, 1918 Yonkers Statesman reporting the accident.

This offers some interesting new details. First off, it identifies the film as The Master Mystery long before the title was officially announced in October. It reveals the location of the shoot as the Unexcelled Film Company (which I covered in more detail here). And it pegs the date of the accident as Saturday, August 10, 1918. I also don't believe I've ever heard that it happened while Houdini was doing a stunt on a chandelier. I'm assuming this was the stunt we see in Episode One (below).
The fracture was a bad one. According to Ken Silverman in Houdini The Career of Ehrich Weiss:

Broken in three places, the wrist had to be set in a plaster cast, and remained weak and painful when the cast was removed. Adhesions developed in the joint, which had to be rebroken by a physician, then subjected to a "new baking electrical treatment." After six months the wrist seemed him stronger than before, "as a ring has grown around the break," but still have not regained flexibility.

As the article mentions, Houdini was a week away from making his debut in the new Hippodrome revue show Everything (Charles Dillingham's follow-up to Cheer Up!). He would go ahead with the show as on August 22 as planned. But because of his injury he would feature a suspended straitjacket escape instead of an announced buried alive escape.