The Magic Times website has posted this intriguing interview with Tony Spina about his friendship with a little-known Houdini assistant, Amedeo Vacca. The interview was recorded in July 2006.
CLICK TO WATCH AT MAGIC TIMES 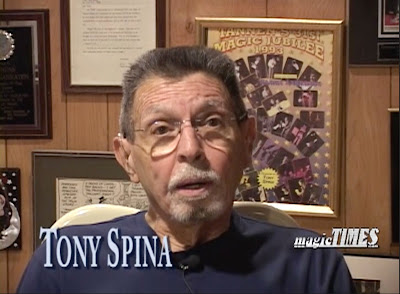 Meir Yedid interviews Tony Spina about Houdini’s secret assistant Amedeo Vacca. Amadeo was Houdini’s front man and secret enabler. You will learn Houdini’s behind the scenes secrets, that were implemented at his shows, stunts, escapes, and challenges.

Magic Times has several other Houdini-related videos by Meir Yedid, including the 2020 broken wand ceremony and a multi-part tour of the Houdini Museum of New York. It's a great site well worth a browse.
Thanks to Leo Hevia for the alert.