Here's a nice series of photos from article about the collection of former magician Edward J. Miller. This appeared on the front page of the June 11, 1950 Chicago Sunday Tribune. The Hardeen poster immediately caught my eye as one I've not seen before. But then I noticed something different about the familiar Houdini poster above it. Can you spot it?
This poster is normally headed "Europe's Eclipsing Sensation". But this one reads, "World's Eclipsing Sensation". 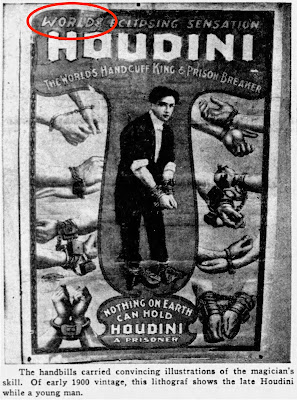 This famous poster was among a series of posters Houdini had made for his 1905-06 U.S. return tour that promoted him as "Europe's Eclipsing Sensation". But as time went on, I suspect this billing became less relevant. We know at least one poster was re-printed with "The World Famous" replacing "Europe's Eclipsing Sensation" as early as 1908. But here it appears to have been done somewhat crudely, possibly with a paste over on the original poster. But that's what makes it so unique and special as it nicely illustrates Houdini's evolving sense of his own success.

It's worth noting that, unlike many other Golden Age magicians, Houdini did not tour the world. Apart from one shot tours of Russia in 1903 and Australia in 1910, Houdini confined himself to North America and Europe. And even his European tours were somewhat confined. He never performed in Italy or Spain, for example. He was planning a world tour for 1915 that would have finally taken him to Japan and China. But his plans never came to fruition, probably due to the outbreak of World War I. But this did not stop him from claiming in his publicity that he had toured the world; nor, as we can see, that he was the "World's Eclipsing Sensation."
Before Edward Miller's death in 1986, his collection was purchased by Jay Marshall. Was this poster still part of the collection? Does it survive today? If you've ever seen it, please let us know in the comments below.
UPDATE: Chuck Romano of My Magic Uncle directs me to the March 1951 50th Anniversary issue of The Sphinx which reproduced several posters from Miller's collection, including his Houdini poster. Ironically, I own this issue, but haven't looked at it in years. Sure enough... 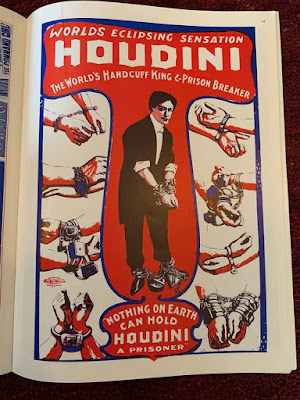 Chuck also provided a clipping from the September 2000 MAGIC magazine that says Norm Nielsen purchased an "Eclipsing Sensation" poster from Jay Marshall. It omits that all important first word, but could it have been this one?
UPDATE 2: The ever vigilant Jim Klodzen sends over this image from a 1959 IBM-SAM convention souvenir flyer that suggest the poster may have lost its "Worlds" by then.