It was 10 years ago on November 10, 2010 at 10AM that I launched WILD ABOUT HARRY. I had already launched a Houdini website called Houdini Lives! in 2006. My original plan was to use Blogger to create a news aggregator for Houdini Lives and other magic websites. In fact, I originally called this new site HOUDINI HEADLINES. But it quickly became clear to me that I could do so much more with the Blogger interface, so I changed the name and began migrating all my Houdini Lives content to this new site and writing new posts. And I've never stopped! 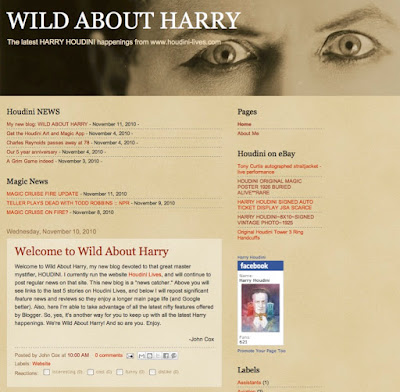 TOP 10 MOST VIEWED POSTS
Fact checking HISTORY's Houdini - Part One
The problem with Bessie
Fact checking HISTORY's Houdini - Part Two
The illicit loves of Harry Houdini
This is J. Gordon Whitehead
SOLD! Houdini straitjacket captures $46,980 at Christie's
What Sid told me
Time to rethink the rethinking on the Houdini punch
The gateway biography
The untold story of Houdini's 1914 Battery Park escape
Related:
Written by John Cox at 10:00 AM