New images of Houdini just keep on appearing! Today David Haversat of David Haversat Magic shares news of a recently acquired unpublished photo that's pretty wild. I really don't know what the heck is going on here, but David does a nice job explaining his own thoughts below. 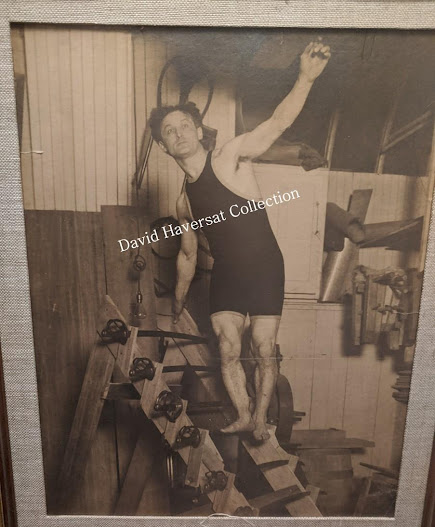 Recently I discovered and purchased this unique image of Harry Houdini climbing a ladder of swords.
This effect was common in the side-show and with Fakirs. However, Houdini never performed this feat for the public.
Based on Houdini’s appearance and clothing, we could place this image around 1908, the time he was performing the Milk Can Escape.
Perhaps this was a prop housed in the workshop of a magic builder, or backstage and Harry just needed to try it to rekindle the “old days” when he worked the sideshows.
Another item in my collection makes reference the very same effect. On October 5, 1927, Howard Thurston wrote to magic builder Rudolph Schlosser asking him to build the very same sword effect!
"Please let me know if you can make a sword ladder for me. An apparatus containing four swords that my Hindu can walk on. It is an old museum trick and let me know if you can understand "the" best construction and give me an idea how you can make and when you will have it finished and how much it will cost.... Howard Thurston"
I can't find a reference of Schlosser every constructing the illusion for Thurston. However, Schlosser did build a number of effects for Houdini, including two Blooming Flower Growth effects and two sizes of Houdini's last illusion known as The Flight of Time. It's also though that Schlosser constructed Houdini's Whirlwind of Colors.
-David Haversat

When I first saw this photo I instantly thought of this famous shot of Houdini standing beside his Milk Can, taken in Atlantic City in 1908. He's in the same bathing suit (which is red, btw), and looks very much the same age. Could this be a playful behind-the-scenes pic from that same shoot?
But there's more! These two photos credited to the Brown Brothers in New York City sold on eBay over the weekend for $515.00 (front facing) and $433.89 (profile). They show Houdini in the backyard of 278, likely in 1925-26, demonstrating a rope tie and paper tear. I believe these images were taken for a magazine article (but I can't seem to find it at the moment). I'm especially wild about that profile shot, which I think is a beautiful study of the older Houdini. 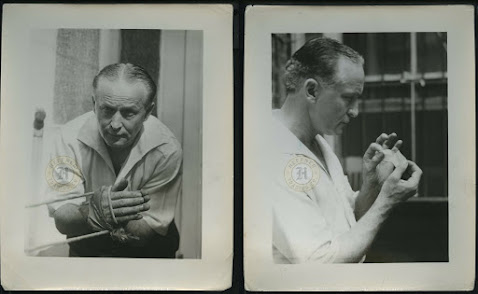 Congratulations to the new owners of these amazing images. Keep 'em coming!