Yesterday I had the great pleasure of joining the members of IBM Ring 129 for a discussion of Houdini in Kansas City. Turns out Kansas City is a "five star" Houdini destination as it's a city where he performed all his major stunts and still has a surviving Houdini theater. (Which I did not know before I researched this presentation.)
Houdini made his first appearance in Kansas City at the original Orpheum theater located at W 9th and May Streets. Houdini played here in 1899, 1900 and 1907. In 1914 Orpheum built a new theater at 1214 Baltimore Ave. This is where Houdini appeared in 1915 (when he did his first ever suspended straitjacket escape) and twice in 1923. Both those theaters are now long gone.

But Houdini came back to Kansas City one last time for the week of New Year's 1924. This marked his third Kansas City appearance inside of 12 months. This time he didn't appear at the Orpheum, but instead played the Mainstreet theater at 14th and Main Street. 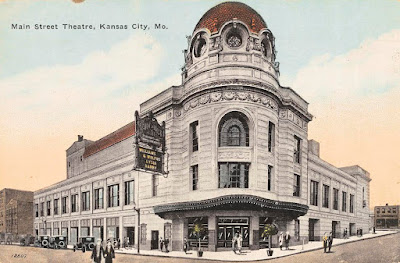 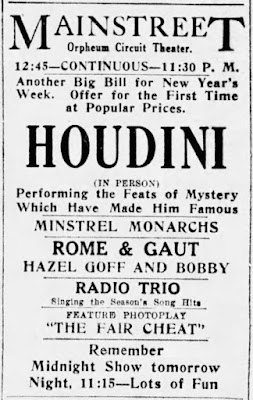 The Mainstreet opened on October 30, 1921. It had a seating capacity of 3000, making it the largest theater in Kansas City. While it was part of the Orpheum Circuit, the Mainstreet was a "Junior Orpheum" that offered more shows a day and featured a movie as the primary attraction. It was the future, but a Junior Orpheum was not typically where a headliner like Houdini appeared.
However, during his 1923-24 vaudeville tour, Houdini did play Junior Orpheums in Los Angeles, San Francisco, Urbana, and, as it turns out, Kansas City. And we're certainly glad he did! Because the Mainstreet theater still stands today and still looks very much as it did in Houdini's day. 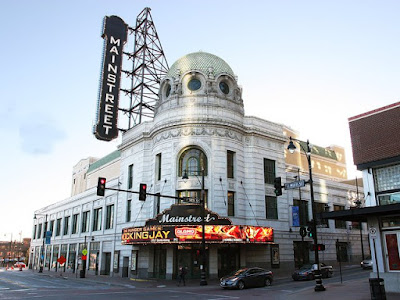 The Mainstreet has seen several owners and renovations during its 100-year history. In 2007 it was placed on the National Register of Historic Places. In 2012 it became an Alamo Drafthouse. After shutting down due to COVID, last month it was announced that Alamo was filing for Chapter 11 and the theater was closing permanently. So the future is now uncertain. But here's hoping the Mainstreet finds new tenants. Not only is it a beautiful old theater, but it's a Houdini Theatre!
A postscript. When Houdini played the Mainstreet you had quite a choice of other entertainment that same week. You could see Alexander "The Man Who Knows" at the Pantages. Or you could see the 4 Marx Brothers at the Missouri in their first Broadway hit, I'll Say She Is. What a week in KC! 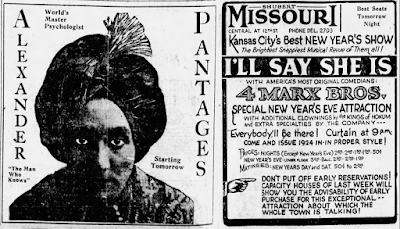 Thanks again to Lance Rich and all the members of IBM Ring 129. Be sure and check out Lance's From the President's Desk column this month where he shares a High School essay he wrote about Houdini. It's great stuff.