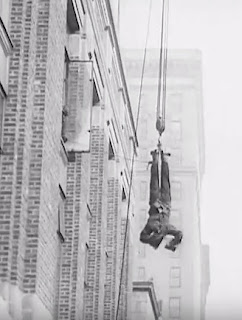 The Martin City Telegraph has a very well researched article by Diane Euston about Houdini's history in Kansas City. KC was important stop on Houdini's tour, and has the distinction of being the first city to witnesses his suspended straitjacket escape on September 8, 1915. The article includes what's credited as a photo of that very escape (right). Diane also recounts a 1907 underwater escape at the Kansas City Athletic Club that's entirely new to me!

So click the headline and have a read at the Martin City Telegraph.