To Gladys from Bess Houdini

Fifteen years ago Bill Bremer, a postcard collector in Texas, unearthed a cache of 36 postcards sent to Houdini's sister, Carrie Gladys Weiss. All this week I am sharing select cards from this remarkable collection. [Read the full story of Bill's find here.]

Today I wrap things up with three incredible cards from Bess Houdini herself. This is appropriate as today is Harry and Bess's anniversary (I didn't even plan it that way). There is so very little written by Bess during Houdini's lifetime that anything in her hand is gold, and these cards have some great content. So let's get at 'em.

The first card is from Kansas City on Sept. 8, 1915. It's addressed to Gladys at 315 West 98th St. in New York, where she and Leopold now resided. The card was written while Houdini was on a coast to coast vaudeville tour that year. 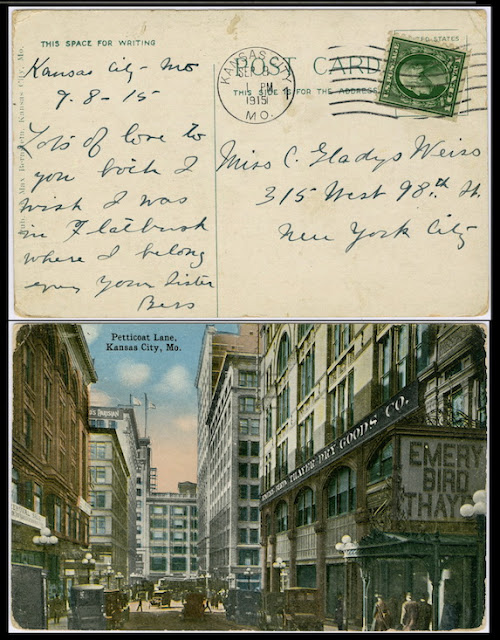 Kansas City - MO
9-8-15
Lots of love to you both. I wish I was in Flatbush where I belong
Ever your sister
Bess

When Bess speaks of "Flatbush," she is taking about home. Harry and Bess had moved out of 278 and in with the Hardeens in Flatbush the previous year. So she appears to be homesick. Or maybe her comment here has something to do with the date. Sept. 8, 1915 was the day Houdini performed what is believed to be his first suspended straitjacket escape. So perhaps her wish to be elsewhere is a sign of her nervousness that day?

Bess seems to have found peace a month later in Seattle, Washington, where she sent this card on October 20, 1915. 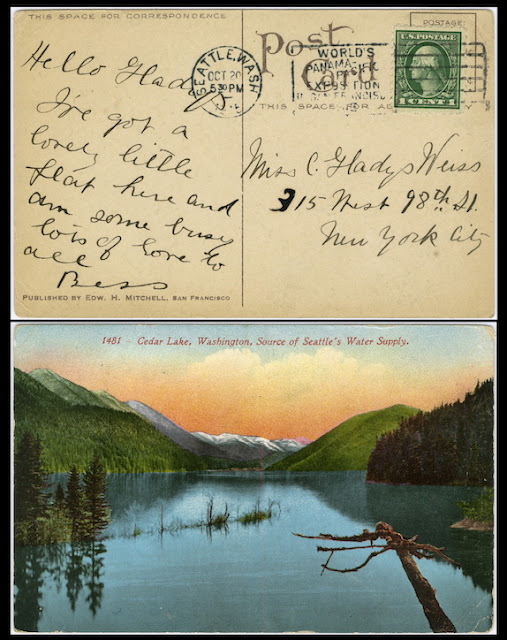 Hello Gladys
I've got a lovely little flat here and am some busy.
Lots of love to all
Bess


It's interesting that she says I've got a lovely little flat, not we. This card was sent while Houdini was playing the Orpheum Theater at 3rd & Madison in Seattle.

In Bill's collection there is a third card from Bess, this one sent to Leopold from Denver, Colorado, on December 30, 1915. 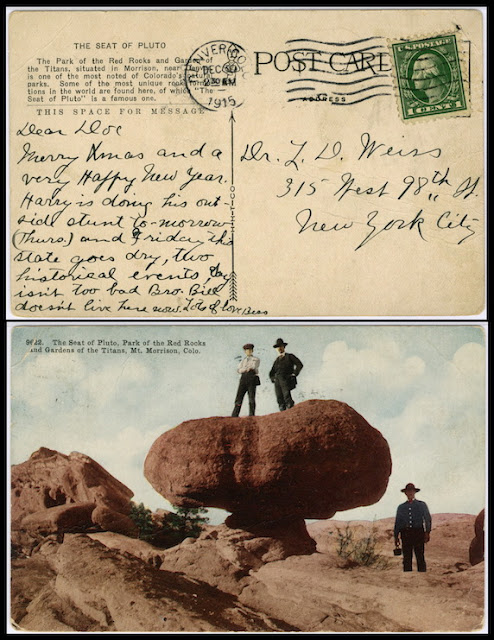 
Bess seems to have recovered from any nervousness about Houdini's suspended straitjackets escapes, at least enough to be able to quip that his upcoming escape (from the Denver Post building on Dec. 30) was a "historical event." Of course, she turned out to be right about this!

Her mention of the state going "dry" refers to a prohibition on alcohol that Colorado and six other states (Iowa, Oregon, Washington, Idaho, Arkansas, and South Carolina) instituted on December 31, 1915. Bess mentioning brother Bill in this context is likely a joke as Bill was said to be quite a drinker (his nickname was "Lobster Bill").

Please join me in thanking Bill Bremer for sharing with us his incredible find. Below are links to all the posts.

You have been added to our subscriber list. A confirmation email has been sent to the address provided. Please confirm and you will be all set!