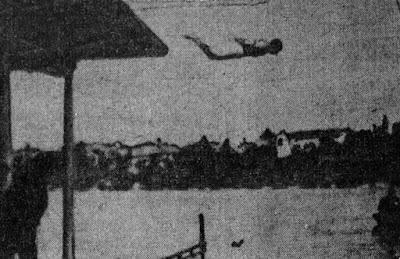 When Houdini toured the United States in 1907, his new outdoor publicity stunt was the manacled bridge jump. Typically this meant jumping from a high bridge into the river of a major city. By September he had performed the stunt successfully in Detroit, Rochester, Pittsburgh, and San Fransisco.

But when Houdini arrived in Los Angeles for what would be his first appearance since 1899, he had a problem. There was no central river or bridge to jump from. Sure, he could jump from a pier into the Pacific Ocean. But in 1907 the coast was so distant from any metropolitan hub that it would have likely gone unnoticed. But Houdini found a solution. He would perform his latest attention getter in Westlake Park. 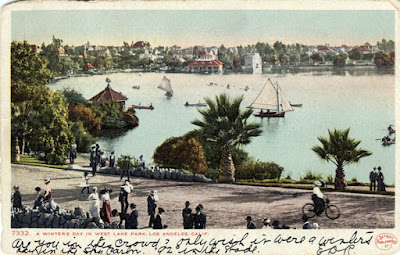 Westlake Park dates to the 1880s and sits adjacent to downtown Los Angeles. The central lake is fed by natural springs and was originally built as a drinking water reservoir. But when the city adopted a pressurized pipe system, it was converted into a park. The park was named for Henricus Wallace Westlake, a Canadian physician who donated a portion of his property to the city. In the early part of the 20th century, the Westlake neighborhood became known as the Champs-Élysées of Los Angeles. All in all, it was an ideal location for a Houdini feat.


The plan as reported in the Los Angeles Herald called for Houdini to be manacled by police and then leap from the roof of the lake's pavilion. The paper also reported Houdini might make a second jump from the bandstand. While other bridge jumps warned of the danger of the cold water and the "shock" Houdini would experience, in sunny California the emphasis was put of the danger of Houdini becoming trapped in the mud at the bottom of the lake, which would be a mere 14 feet at the jump spot. "This is not attempted suicide," the Herald assured its readers, "because Houdini loves life and does not desire to die, but it is just as near it, and a lot nearer than most men care to go."

The paper also encouraged amateur photographers to attend the event with their cameras, and promised a photo of Houdini's leap would run in the paper as part of an article he would write about his life and career. 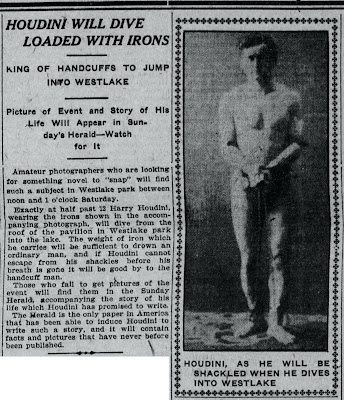 On Saturday, September 28, five thousand people turned out to watch as Houdini's hands were manacled behind his back by three Los Angeles patrolmen. Houdini then made his headlong dive from the southeast corner of the pavilion as "five hundred cameras clicked in unison." The Herald's lively account proves that a close quarter underwater stunt could be every bit as suspenseful as any suspension bridge spectacular.

Five thousand spectators held her breath in symphony with Harry Houdini at Westlake park yesterday afternoon when the handcuff marvel did a Count of Monte Cristo stunt by leaping into the lake heavily manacled.

"Oh I bet he's drowned," said a small boy in awed and shuddery tones when the man remained what seemed an interminable time beneath the shimmering water of the lake.

A small line of bubbles came to the surface. Then larger bubbles arose and a little cloud of mud drifted to the top. Five thousand shivers ran down five thousand spines.

"I told you he struck his head into the mud," said the wise guy. Then the feet disappeared. A second later Houdini's head bobbed to the surface. He made it dramatic in shivery enough to satisfy even the small gamin who had half hoped to see a drowning or at least a thrilling rescue scene.

Another nice detail reported by the paper was that one young boy "with a wire bridle on his teeth" who had waited two hours to see the escape "went home with an autograph which read: Harry Handcuff Houdini." And despite the suggestion that Houdini might make a second dive from the bandstand, it appears the pavilion leap was the only dive of the day.

As promised, a photo did appear as the central image in an autobiographical piece by Houdini that appeared in the Herald the following day. The image shows Houdini horizontal in the air moments after in his take off from the roof. This, as far as I know, is the only photo of the Westlake leap.

"Looking out of my hotel window I see a street car passing which bares the announcement 'Houdini will dive from the pavilion roof, heavily handcuffed, in Westlake Park, Saturday at 12:30 noon.' By the time this is printed that will be yesterday, and I have every hope that I shall still be alive. Should I fail to get those cuffs loose before my breath gives out you can imagine where I am while you are reading this."


So what of the location today?

In the early 1940s Westlake Park was renamed MacArthur Park and later designated City of Los Angeles Historic Cultural Monument #100. But by the 1970s it had become known for violence, prostitution, drug dealing, and the occasional drowning (as well as a famous Donna Summer song). In 1990 alone the park saw some 30 murders. MacArthur Park has seen attempts at redevelopment in recent years, but they have not been as successful as other parts of the downtown area.

I've often driven past MacArthur Park and resolved that one day I'd try to discover where Houdini's jump took place. With the Covid-19 shutdown giving me time and a relatively quiet city at my disposal, I decided now was that time. So I reached out to John Bengtson of the fantastic Silent Locations blog. (The park was often used in silent films.) John was able to provide me with several historic images that showed the pavilion as it appeared in Houdini's time, and later when a new boathouse was erected on the same spot. 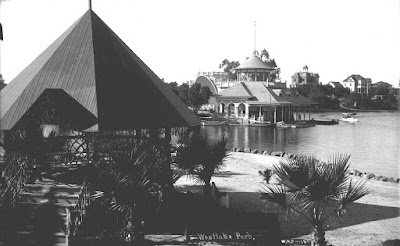 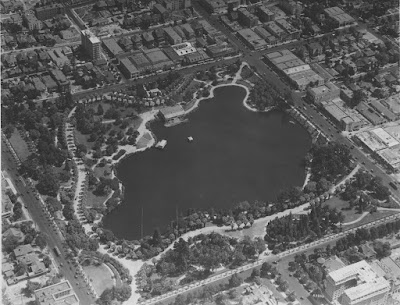 One thing I've discovered about Houdini location hunting is these areas are, by their nature, located in the oldest parts of cities. This means they can be in pretty rough shape. There are notable exceptions. MacArthur Park is NOT one of those exceptions. Birds and humans have been left alone to do their worst, and if Houdini touched that water today he'd have a lot more to worry about than mud. However, I was happy to see that one of the pillars at the park entrance carries the original name of Westlake. 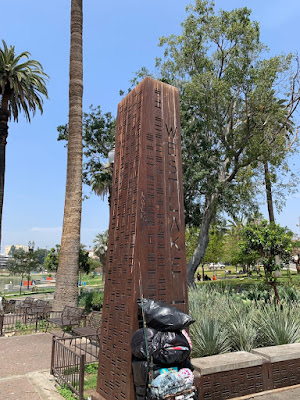 The footprint of the lake has also changed since Houdini's day. In 1934 Wilshire Boulevard bisected the park and the northern end of the lake was filled in. Happily, the site of the old pavilion was spared as it continued to be the location of subsequent structures.

The last boathouse that stood on the site was torn down in 2014 and has not been replaced. But the concrete foundation remains, and that's enough to show us exactly where Houdini's Westlake leap took place. 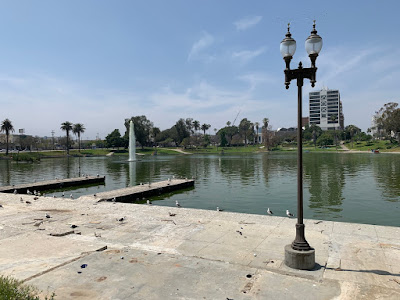 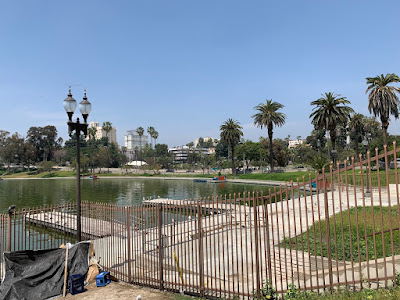 The Westlake leap is another one of those Houdini stunts that doesn't get mentioned in biographies. I'm not even sure how I knew about it in the first place. But it's certainly a story worth telling, and it's great to know this Houdini location is still around to visit. 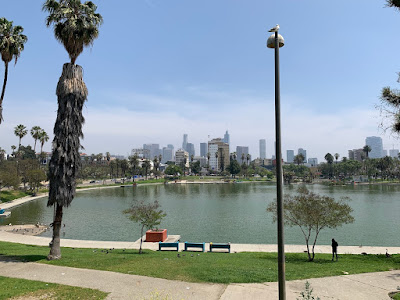 When Houdini returned to Los Angeles in 1915, his suspended straitjacket escape had become his new go-to outside stunt. Happily, there was no shortage of tall buildings in Los Angeles. But that is another story.

Thanks to John Bengtson for his help in finding this location. Historical information about MacArthur Park comes from Wikipedia.